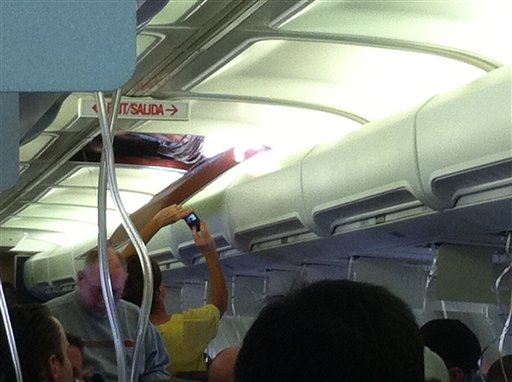 Suddenly, oxygen masks on a Southwest Airlines flight from Phoenix to Sacramento came down, and the plane went into a rapid descent before making an emergency landing in Yuma, Ariz. A large hole, which federal authorities are calling a "fuselage rupture," had suddenly opened in the cabin's ceiling. None of the 118 people on board was seriously hurt, officials say. They add that terrorism isn't suspected.

"I thought maybe there was an explosion in one of the engines," Wagner, a passenger on the flight, told "Early Show on Saturday Morning" co-anchor Russ Mitchell. "But, (I) really didn't know, and then one of the panels from the ceiling over my head had fallen down. and, you know, that was about all we knew. We just kept descending at a very rapid rate."

Wagner says, as it was all happening, she was thinking, "Just sort of -- is this how it's like to die? It just -- so many thoughts were going through your head, and it's hard to focus on any one. Just wondering when it was gonna be over, or if they were gonna come on and say it was all a mistake. It didn't really happen."

She added, "I've thought about what other people think about when you hear about other plane crashes and stuff. And it just -- as soon as we got down to a cruising level and we were starting to look for an airport to land I called my husband and just told him what was going on and said, 'I love you."'

"As we were going through the rapid descent," Wagner recalled, "no one really said anything. The flight attendants were going around making sure everyone's oxygen masks were on. And they were helping some people who had passed out because, I guess, their masks weren't working properly. And then as soon as we got down to an altitude where we no longer needed the oxygen, then the captain, they told us we could take our masks off, and the captain then came on and said that we were going to be making an emergency landing in approximately five to ten minutes."

The other passengers, says Wagner, handled things "tremendously well. There were a few people that were showing distress and crying. But for the most part, it was -- it was pretty calm, and the crew did a lot to help keep us calm."

The hole was directly above Wagner's head and, "I think fortunately for me -- it was over my head, so I couldn't actually see the hole. I didn't realize what a huge hole it was."

And when she got off the plane, Wagner says, it was the greatest feeling in the world. "The captain did a great job. Can't compliment him enough."

Wagner says life "definitely" looks different to her now than it did 24 hours ago: "Just don't take anything for granted. And if you want to do something today, do it today. Don't do it tomorrow."