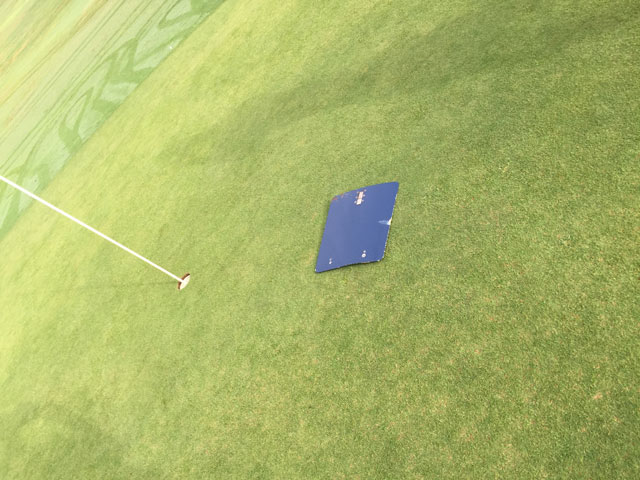 CHARLOTTE -- A small plane door fell from the sky and landed by some golfers near the 7th hole on a golf course in North Carolina, reports CBS affiliate WBTV.

The small panel door came from an American Airlines Flight 1910 prior to landing with 146 passengers abroad. According to the FAA the incident occurred around 8:20 a.m. Wednesday morning. The flight had left from Dallas and was preparing to land in Charlotte.

CBS News' Kris Van Cleave reports that the airline says the door is about 15 by 16 inches and weighs a few pounds.

A man tells WBTV he was golfing with two other men at the Green Meadows Golf Course when they saw an object.

"Falling from the sky, twirling around in circles and land approximately 40 yards to the right of the green," he said.

According to the Federal Aviation Administration (FAA), the golfers contacted them when they found the panel. American Airlines representatives say they notified the FAA as well.

"American Airlines 1910, an Airbus 321 aircraft, lost a small panel door while on approach to Charlotte-Douglas Intl. Airport this morning," a statement from the FAA read in part.

WBTV reports that the panel has been recovered. The plane landed 20 minutes after the panel door fell and there were no injuries.

American Airlines says the panel door covers the hydraulic servicing area, which is not a pressurized area of the aircraft. It would not cause a flight safety issue.

But as CBS News' Kris Van Cleave reports the incident comes as the National Transportation Safety Board announced it's launching an investigation into a close call involving another U.S. Air A-321 landing at Charlotte's airport.

The FAA says it is investigating the most recent incident.