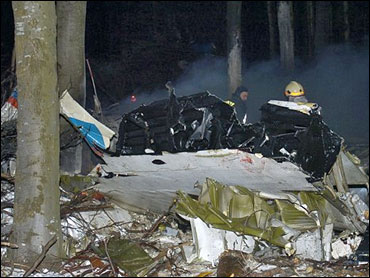 Authorities say a Slovak military plane carrying troops back from Kosovo crashed into a mountainside in northeastern Hungary, killing at least 42 people.

Only one person survived after the AN-24 aircraft went down Thursday near the Slovak border, said National Police spokesman Laszlo Garamvolgyi. The survivor suffered was taken to a hospital in the Slovak city of Kosice for treatment of head injuries and burns but there was no immediate word on his condition.

Tibor Dobson, spokesman for Hungary's national catastrophe rescue service, said there were 43 people on board the plane and that all but one died, based on a passenger list provided by the Slovak Embassy in the Hungarian capital of Budapest.

That included 35 passengers who all had some kind of military rank and eight crew members, Dobson said.

But Garamvolgyi said there were 45 people on board and that 44 were killed. The discrepancy could not be immediately explained.

A NATO officer, who spoke on condition of anonymity because he was not authorized to speak to the media, said in Kosovo that the plane was carrying Slovak soldiers back home after serving in the NATO-led peacekeeping force. Officials say Slovak troops help patrol the boundary between Kosovo and Serbia.

According to a statement from the local police, the plane cut off the tops of trees along a 400-yard stretch before slamming into the mountainside. Air traffic controllers lost sight of the aircraft just after 7:30 p.m. and authorities began receiving reports of a crash from eyewitnesses shortly thereafter.

"An initial inspection revealed that the airplane ... was not carrying weapons, ammunition or explosives," the Borsod-Abauj-Zemplen County police said in a statement.

Gergely Abraham, a spokesman for the Economic and Transport Ministry said the area where the crash occurred about 155 miles northeast of Budapest is not heavily populated.

Hungarian rescuers and fire crews are at the crash site.

Dobson said around 450 Hungarian and 80 Slovak personnel are involved in the rescue effort, which so far had recovered the bodies of 18 victims.

The agency also said the Slovak army sent a helicopter to the crash site, but it was unable to land because of bad weather.