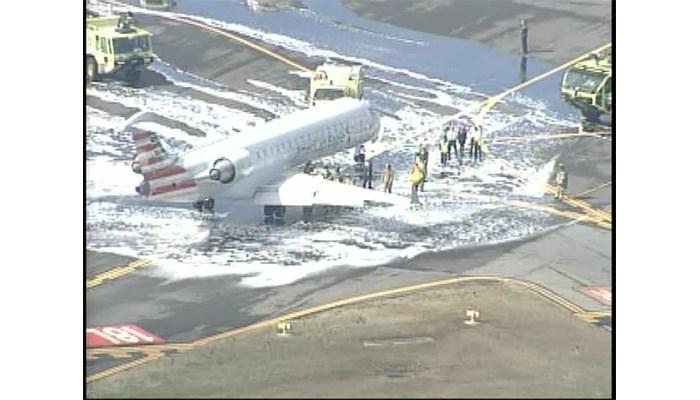 CHARLOTTE, N.C. --  A flight bound for Mississippi from Charlotte declared an emergency after it collided with a deer while taking off Wednesday, reports CBS affiliate WBTV in Charlotte..

According to the Federal Aviation Administration (FAA), PSA Airlines flight 5320, a subsidiary of American Airlines, attempted to take off from the Charlotte Douglas International Airport when the collision with the deer happened on Runway 36C. It turned around and landed safely on Runway 36R.

American Airlines officials say none of the 44 passengers or four crew members were injured in the collision.

American Airlines spokeswoman Katy Cody said the aircraft was leaking fuel as a result of the deer strike. TV stations showed damage to one of the right front wing flaps of the CRJ700 jet, and emergency personnel sprayed foam on the aircraft as a precaution.

Emergency crews were called out to the collision and used foam on the plane after the collision with the animal caused a fuel leak. The runway was closed for a while so that crews could clean up from the incident. The airplane was towed away around 2 p.m.

The passengers, who were slated to flight to Gulfport, were taken back to the terminal on buses. The airline is working to get them on other flights.

No word on the deer. Airport officials will investigate how it got past chain link fences surrounding the airport.