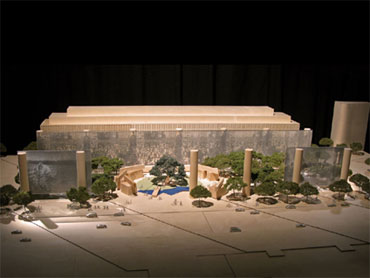 A national memorialthat still needs millions of dollars to complete to former president and World War II general Dwight D. Eisenhower would include 80-foot (24-meter) tall columns and metal "tapestries" of photos, according to plans announced Thursday in Washington.

Celebrity architect Frank Gehry designed the $100 million memorial, which also still needs the approval of federal agencies to be completed. A commission overseeing its construction expects it to be finished by 2015.

The general's grandson, David Eisenhower, who is a member of the memorial commission, called the plans an "amazing design concept" during a news conference with Gehry.

Gehry said that historically, tapestries have been used to tell stories, and that's why he chose to weave the photos. Gehry said the 13 columns, 12 feet (3.6 meters) in diameter and about 80 feet tall, were something he initially needed to hold up the tapestries, but they also created a "dignity for the site."

Planning for the Eisenhower memorial began more than a decade ago and the site, about four acres of land by the National Air and Space Museum and in view of the Capitol, was selected in 2006. The monument will be the first in the National Mall area since the World War II Memorial opened in 2004 and the first to a president since the Franklin Delano Roosevelt Memorial opened in 1997.

The federal government has already spent about $29 million to develop the Eisenhower memorial, and the rest will be a combination of public and private money.

The memorial will be Gehry's first work in Washington. The 81-year-old architect designed the Walt Disney Concert Hall in Los Angeles, the Guggenheim Museum in Bilbao, Spain, and a number of other buildings across the globe.

Gehry said he doesn't often enter competitions like the Eisenhower one, but that his Army service from 1955 to 1957, while Eisenhower was president, prompted him to participate.

"I have a personal bias against bronze representations because they never quite live up to the great Greek statutes that I've studied over the years," said Gehry.

Born in 1890, Eisenhower grew up in Kansas and graduated from the U.S. Military Academy. During World War II, he commanded the Allied Forces in Europe, including the D-Day invasion of France. After the war he became president of Columbia University and the first commander of NATO before running for president 1952, a campaign that featured the slogan "I like Ike."

As president from 1953 to 1961, he oversaw the Korean War, established America's Cold War strategy, expanded Social Security and created NASA and the interstate highway system. In 1954, after the Supreme Court's decision integrating schools in Brown v. Board of Education, Eisenhower sent federal troops to Little Rock, Arkansas, to escort nine African-American students into Little Rock High School and enforce integration. He died in 1969.