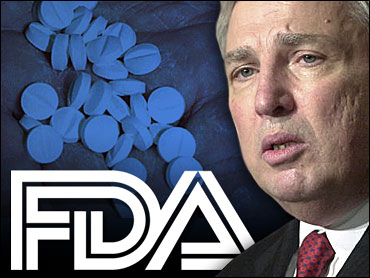 Thursday's ruling by the Food and Drug Administration ends a three-year effort to loosen restrictions on the pill known as Plan B — and eliminates a hurdle that threatened to sink President Bush's pick to head the agency.

The delay had ensnared Mr. Bush's nominee to head the FDA. On Thursday, two senators lifted their blockade on the nomination, making confirmation of Dr. Andrew von Eschenbach as FDA's commissioner likely next month.

Following the FDA's decision, the morning-after pill can be sold to women over the counter. The emergency contraception is available to those who can prove they're at least 18. Those who are younger still need a prescription, the Food and Drug Administration told manufacturer Barr Pharmaceuticals Inc.

"I am still concerned about the age restriction," Murray said.

Talking to reporters Thursday aboard Air Force One as President Bush headed to Kennebunkport, Maine, White House spokeswoman Dana Perino, asked for his reaction, said Mr. Bush "appreciates that the FDA did an exhaustive review, that they recognized the critical distinction between minors and adults and the risks a drug like this could pose."

Noting the restrictions the agency attached to its approval, Perino added, "I'm sure the FDA will follow through on that and make sure these important conditions are established and enforced."

The compromise decision is a partial victory for women's advocacy and medical groups that say eliminating sales restrictions could cut in half the nation's number of unplanned pregnancies. Opponents have argued that wider access could increase promiscuity.

"While we urge the FDA to revisit placing age restrictions on the sale of Plan B, it is real progress that millions of American women will now have increased access to emergency contraception," Murray and Sen. Hillary Rodham Clinton, D-N.Y., who had held up the confirmation, said in a joint statement.

The pills are a concentrated dose of the same drug found in many regular birth-control pills. When a woman takes the pills within 72 hours of unprotected sex, they can lower the risk of pregnancy by up to 89 percent. If she already is pregnant, the pills have no effect.

The earlier it's taken, the more effective Plan B is. But it can be hard to find a doctor to write a prescription in time, especially on weekends and holidays — hence the push to allow nonprescription sales.

Barr has said it hopes to begin nonprescription sales of Plan B by the end of the year. The pills will be sold only from behind the counter at pharmacies — so the pharmacist can check photo identification — but not at convenience stores or gas stations.

There isn't enough scientific evidence that young teens can safely use Plan B without a doctor's supervision, von Eschenbach, the FDA's acting commissioner, said in a memo.

But Barr did prove that over-the-counter use is safe for older teens and adults — and licensed pharmacies are used to checking for proof of age 18 before selling tobacco and certain other products, von Eschenbach wrote in explaining the agency's age cutoff.

"This approach should help ensure safe and effective use of the product," he concluded.

Plan B's maker was disappointed that FDA imposed the age restriction and pledged to continue working the agency to try to eliminate it.

"While we still feel that Plan B should be available to a broader age group without a prescription, we are pleased that the Agency has determined that Plan B is safe and effective for use by those 18 years of age and older as an over-the-counter product," said Bruce L. Downey, Barr's chairman.

As a condition of approval, Barr agreed to track whether pharmacists are enforcing the age restriction, by, among other things, sending anonymous shoppers to buy Plan B. FDA said Barr is to conduct that formal tracking at least twice in the first year of sales and annually thereafter, and report stores that break the rules to their state pharmacy licensing boards.

But Barr also will conduct a national education campaign to raise awareness of emergency contraception, among both women and health providers.

Nine states — Washington, California, New Mexico, Alaska, Hawaii, Maine, New Hampshire, Massachusetts and Vermont — already allow women of any age to buy Plan B without a doctor's prescription from certain pharmacies. Proponents of those pharmacy access programs believe that minors won't see any change in those states, because the pharmacist already technically writes a prescription.

The FDA approved prescription-only sales of Plan B in 1999, and the quest to sell nationwide without a doctor's note began in 2003. That year, the agency's independent scientific advisers overwhelmingly backed nonprescription sales for all ages, and FDA's staff scientists agreed.

But higher-ranking officials rejected that decision, citing concern about young teens' use of the pills without a doctor's oversight. Barr reapplied, asking that women 16 and older be allowed to buy Plan B without a prescription. Last August, the FDA postponed a final decision indefinitely, saying the agency needed to determine how to enforce those age restrictions.

FDA's handling of Plan B sparked a firestorm: Critics charged that political ideology had trumped science; a reproductive-rights group sued to force FDA to settle the issue; and congressional auditors concluded the agency may have made decisions without reviewing all the evidence.

Still, nationwide nonprescription sales were widely consider a doomed issue until last month, when the FDA reversed itself and said it would reconsider if Barr agreed to an age 18 restriction. That surprise announcement came on the eve of a Senate committee hearing on whether to confirm von Eschenbach as FDA's new head.

"While I am glad that the drumbeat for a return to a science-based FDA has had some positive impact, this decision still represents a compromise, one that could have the unintended consequence of hurting young women's health," said Dr. Susan Wood, who resigned as FDA's women's health chief to protest the agency's 2005 delay.

Nancy Keenan, president of NARAL Pro-Choice America, welcomed the FDA's decision. "Finally, the FDA put sound science before politics and made this safe, effective birth-control option more accessible to women," said Keenan. "The American public overwhelmingly supports increased access to the 'morning-after' pill as a way to prevent unintended pregnancy and reduce the need for abortion."

But Wendy Wright, president of Concerned Women for America, said Plan B's wider availability could give women a false sense of security, since it isn't as effective as regular birth control. Wright also worries that adult men who have sex with minor girls could force the pills upon them.

"Statutory rape is a very serious problem. This decision is going to allow statutory rapists to rely on this drug to cover up their abuse," Wright said