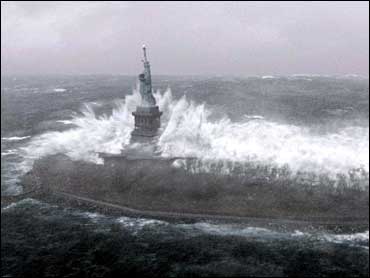 A German court on Wednesday heard a Harvard University professor's claim that the writer and director of "The Day After Tomorrow" plagiarized his book in creating the movie.

Attorney Konstantin Weger told the Cologne state court that the author wants its German distributor, 20th Century Fox Deutschland, to put signs in theaters saying that the movie is based on his book.

He argued that the book and movie feature similar scenes set in an Arctic research station, similar scenes of Americans fleeing over the Mexican border, and similar characters. The book was sent to a partner of Emmerich in 1998, he said.

"You watch the film and you read the book, and you have different scenes before your eyes," he said.

In "The Day After Tomorrow," toaster-sized hail pulverizes Tokyo, tornadoes rip apart downtown Los Angeles, and a massive tide leaves only the tops of New York's skyscrapers above water before a high-altitude superstorm flash-freezes everything north of Texas into a new ice age.

At Wednesday's hearing, Judge Margaret Reske said that there were similarities between the film and the book, but expressed skepticism that they amounted to plagiarism.

"We don't see that anything has been taken in the sense of copyright," she said.

A ruling is expected July 7.