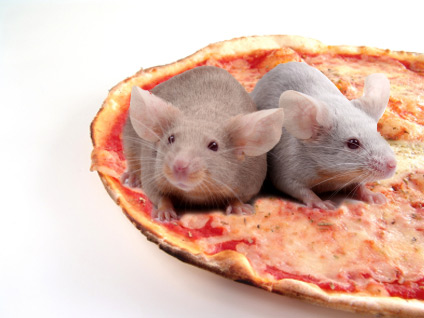 UPPER DARBY, Pa. - A pizzeria owner with mice problems he blamed on competitors tried to sabotage two rival shops by dumping mice in them Monday, authorities in suburban Philadelphia said.

Upper Darby police said a man walked into Verona Pizza on Monday afternoon and asked to use the bathroom. After he left, the owner said he found footprints on the toilet and noticed that the drop ceiling had been disturbed, and he found a bag tucked up above.

The owner turned the bag over to two police officers who happened to be eating lunch there, and they found three white mice inside, police Superintendent Michael Chitwood said.

Police say the man then walked across the street to Uncle Nick's Pizza and dumped another bag into a trash can inside the establishment, and police found five live mice and one dead one inside.

"We look in there and there is a bag of mice," said Harry Saritsoglou, owner of Uncle Nick's Pizza, told CBS-3 in Philadelphia. "He is out of his mind. He lost his mind." (Scroll down to watch video).

"We have never had anything like this where mice have been used as an instrument of crime," Chitwood said.

"This is food terrorism by mice."

Chitwood told reporters that investigators believe Galiatsatos was having mice problems himself that he blamed on his competitors.

"We believe that he's trying to put the competitive pizza places out of business," Chitwood said. He said the mice, apparently purchased that day at a nearby pet store, have been turned over to animal control officers.

Galiatsatos remained in custody and it was unclear whether he had an attorney. A call to his shop was referred to a man who said he was Galiatsatos' father but declined to give his name and declined to comment.