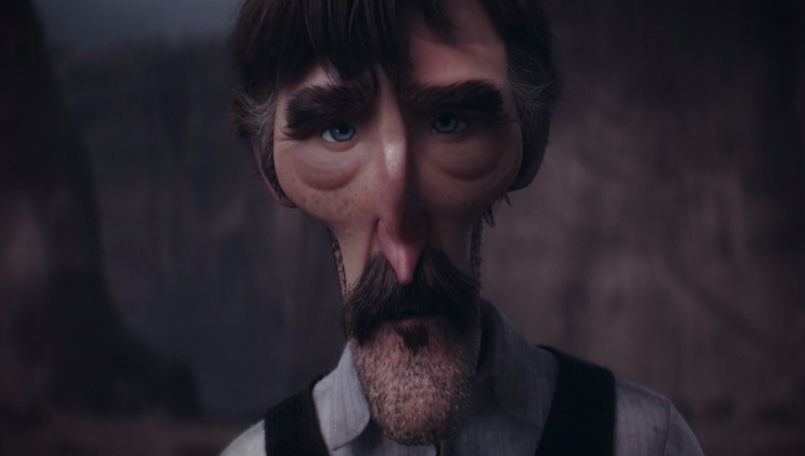 Sure, Pixar films have dealt with grown-up themes before. “WALL-E” addressed consumerism, human impact on the environment and love. “Inside Out” gave us a nuanced glimpse into the human condition and the importance, or rather necessity, of pain. And who could forget the heartbreaking opening sequence of “Up?”

All those films were, in their own ways, both adult and dark. But the new short created by Pixar animators Lou Hamou-Lhadj and Andrew Coats is unquestionably the darkest and most adult work we’ve seen in the genre of animation yet.

It’s called “Borrowed Time,” and the protagonist at its core is a weathered sheriff with bags under his eyes and demons in his heart.

Those demons are grief and guilt. And as the animated short cuts between the present and the sheriff’s childhood memories, we see why.

In a very real way, he bears responsibility for his father’s death. And though it is clear that this grizzled man has spent his life trying to honor his father’s legacy – becoming the sheriff, as his father was at the film’s start – in the real, non-animated, adult world, there are simply some demons that haunt a person forever. So, that is what Hamou-Lhadj and Coats depict in the animated world of “Borrowed Time.”

“A goal for us was to make something that kind of contested the notion of animation being a genre... for children specifically,” Hamou-Lhadj said in a featurette explaining the inspiration behind the film. “We really wanted to make something that was a little bit more adult in the thematic choices, and show that animation could be a medium to tell any sort of story.”

In that, it appears the two Pixar animators succeeded.

“Borrowed Time,” from Quorum Films, takes viewers on a journey through the depths of grief and guilt – right up to the edge of suicide. And somehow, in the process, it makes them forget that they’re watching animation at all.