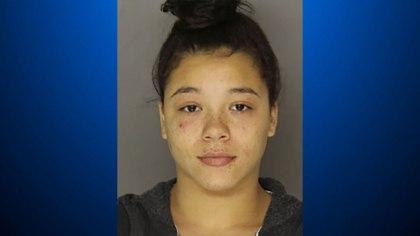 PITTSBURGH  --  Authorities located and arrested a 19-year-old fugitive on Thursday after she posted photos of herself at a Pennslyvnia amusement park on Snapchat, CBS Pittsburgh reports.

According to authorities, Dolan was arrested for striking one person and running over a second with her car at an Allegheny County gas station in January of 2016. Dolan confessed to police after the incident.

Last month, Dolan was charged with aggravated assault, harassment and disorderly conduct in another incident. She allegedly hit a woman in the face multiple times after the woman was involved in a vehicle accident with Dolan's grandfather. Dolan left the scene before authorities arrived.

Authorities have been searching for Dolan since an arrest warrant was issued on May 25.

The Allegheny County Sheriff's Office says Dolan began posting photos on Snapchat of herself and her child at Kennywood Amusement Park in West Mifflin, Pennyslvania around 4:20 p.m. Thursday.

Officers contacted the local police, who found Dolan inside the park and arrested her without incident.