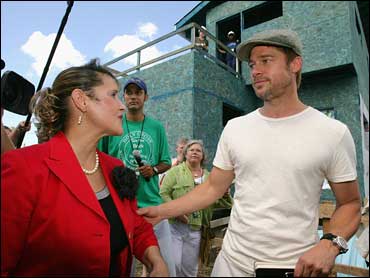 The first homes in Brad Pitt's Make It Right rebuilding project are complete, and some three years after Hurricane Katrina devastated New Orleans, 68-year-old grandmother Gloria Guy was on hand to give the actor a big hug.

Pitt, his partner Angelina Jolie and their family of six children privately toured the hard-hit Lower 9th Ward district earlier this week. The celebrity couple bought a home in New Orleans about a year after Katrina struck and became involved in launching the project to help rebuild the city's hardest-hit neighborhood.

"I thank God for Brad Pitt," Guy said Thursday when reporters viewed the first six homes Pitt and family visited Monday and Tuesday. "I told him how much I appreciate all that he's done for me and my family."

Guy is moving into one of the first of some 150 Make It Right homes planned for a district where levees crumbled after Katrina, unleashing floodwaters that knocked previous homes off their foundations. Her new home sits atop eight-foot concrete pilings amid empty, grassy lots where some steps lead into thin air _ where houses once stood.

The replacement homes cost an average $150,000 each and are for residents who still own their property and can pay insurance and taxes. Their monthly house payments will be based on applicants' income and subsidized by funds raised by Pitt's foundation.

Nearby, 72-year-old resident Gertrude LeBlanc relaxed on a porch swing as dozens of journalists swarmed about.

She was one of the first back after Katrina and said her neighborhood had been a lonely place for too long.

"I've waited a long time for my neighbors to start coming home," she said, noting fewer than a third of the neighbors have moved back.

While the Make It Right homes boast more contemporary designs than the Creole cottages and shotgun-style homes typical of New Orleans, planners said they hoped the new homes with their solar panels and energy-saving appliances will catch on in the city as New Orleans continues to rebuild.