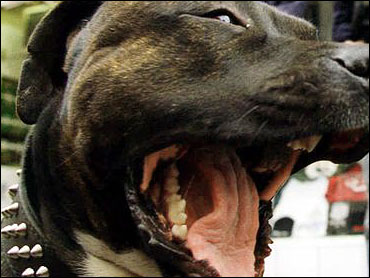 Two pet pit bulls with no apparent history of aggression and described as well-kept attacked and killed their owner inside his suburban St. Louis home, authorities said Thursday.

Lorinze Reddings, 42, of St. Charles County, died after an apparent attack by his 8-year-old female and a 3-year-old male dogs. The animals were turned over to St. Charles County Animal Control and will be euthanized, director of humane services Theresa Williams said.

Sheriff's Lt. Craig McGuire said officers were Tuesday called by friends of Reddings who went to the man's locked home when they were unable to reach him, then peered through a window and saw him motionless on the living room floor.

Deputies and paramedics entered through an unlocked, second-floor sliding door and were confronted by two pit bulls they managed to secure in the basement, though it took about eight minutes to restrain the dogs, McGuire said.

Reddings was declared dead at the scene, with bite wounds on his feet, hands, neck and groin. Authorities ruled out foul play, finding no signs of forced entry, struggle or items missing.

Investigators initially suspected that Reddings died of natural causes and was later mauled by the dogs. But an autopsy Wednesday determined the cause of death as strangulation by canine. Reddings had broken neck bones and cuts around the throat.

"We've had a number of bite cases over the years or cases when someone passes away and is then mauled by a dog," but no local instances in recent memory of dogs killing their owners, McGuire said.

Officials weren't sure what prompted the attack. Williams said animal control officers had never been called to the home before.

"The dogs look like they've been very well cared for," Williams said. "They're a little overweight, they're in good health, they've been seen at the vet regularly."

She noted that while pit bulls probably don't deserve their reputation as particularly vicious dogs, their size, strength and tenacity can make them extremely dangerous if they do turn aggressive.

"I don't believe pit bulls are more innately aggressive to humans," Williams said. "They can certainly be more dangerous to pets. They can be wonderful dogs, very intelligent, but what you have is a dog that was bred to kill other animals."

If one of the dogs became unexpectedly aggressive, it's possible the other followed suit, Williams said.

"A pack mentality is always possible when you have more than one dog," Williams said.

In 2001, 10-year-old Rodney McAllister of St. Louis died when he was attacked by a pack of stray dogs in a St. Louis park.