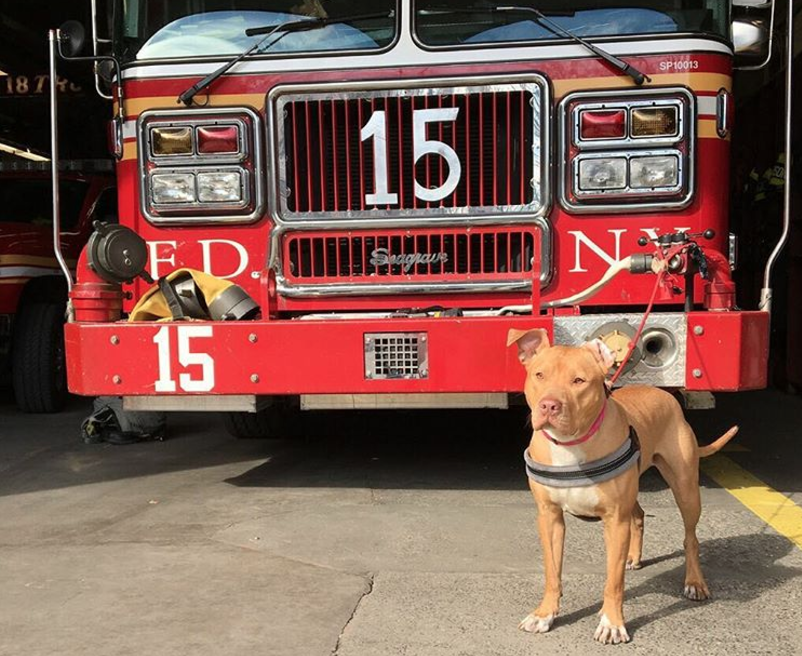 When animal rescuers Erica Mahnken and her fiancé, Michael Favor, found Ashley the pit bull inside an abandoned “crack house” in Staten Island, New York, last month, the dog was malnourished and covered in cigarette burns.

For at least two days in the middle of January, the dog was left without water, food or electricity.

“We didn’t ask any questions when the person called us and told us the dog was alone,” Mahnken told CBS News. “It was freezing out. There was nothing in the house. No, we didn’t think about it -- we just ran and got her and said we’ll figure out what we were going to do after we got her out of there.”

Mahnken, Favor and their friend Lara Ribeiro started foster-based rescue No More Pain Rescue nearly a year ago. At the time, the pair didn’t have anywhere to house the shivering dog. So, they called up some firefighter friends from a Lower East Side FDNY station called “Fort Pitt.”

The firefighters, who used to house a rottweiler, agreed to temporarily welcome the dog on Jan. 9.

Three days later, they called up Mahnken and asked if they could adopt the nearly year-old pit bull. Of course, Mahnken said, “Yes!”

“My heart wants to explode,” Mahnken said. “Everyone’s so quick to judge a dog, especially a dog you don’t know where it came from or what kind of person they are and what kind... It is very satisfying.”

The dog loves to hang out with the crew in the kitchen and goes on ride-alongs with the firefighters when they respond to a fire. She even has her own little spot on the fire truck, Mahnken added.

Ashley even has her own official Instagram account, which has already garnered more than 2,800 followers. Firefighters give almost updates -- almost daily -- on the dog’s adventures and whereabouts.

“I love my new job!” they wrote in one post.

“Reporting for doodie... ready to ride...I got the woof! (Roof),” they joked in another.

Mahnken is happy to see Asfhely doing so well, and says she tries to make frequent trips to the firehouse to visit.

“Whenever she’s there her tail is wagging, she’s super friendly and jumping on everybody,” Mahnken said. “She’s really loveable.”

When Mahnken found the dog in early January, veterinarians said she was about 25 pounds underweight. FDNY firefighters say the dog now weighs about 50 pounds and is on her way to becoming perfectly healthy.