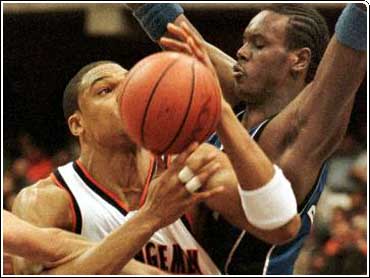 Imperfect in almost every way Monday night, No. 4 Syracuse is perfect no more.

Darius Lane hit a 3-pointer with 39 seconds left off a pass from Shaheen Holloway to lift Seton Hall to a 69-67 victory over the previously unbeaten Orangemen, whose season-opening win streak ended at 19 games.

"We fought, we battled, we knew Syracuse was a tough team," said Holloway, who had 12 points, 11 rebounds, and nine assists. "But we wanted to come in and try to make a statement, and I think we did that. It makes it that much sweeter because they were undefeated."

And yet despite hitting just 2-of-13 3-pointers, shooting 37.3 percent, and getting only seven points combined from starters Damone Brown, Ryan Blackwell and Tony Bland, Syracuse hung in until the end.

With the Carrier Dome crowd reaching deafening levels, Blackwell scored his only points of the game with 1:07 left, hitting two free throws to put Syracuse ahead for the last time, 67-66.

Lane, who finished with 20 points, won it with a long 3 from the left side.

"This is a real big victory," said Lane, who was 6-for-14 from long range. "We worked so hard to get to this point, and we wanted to prove to everybody in the conference and the nation that we're a good team. I think we did that."

The game was rescheduled from Jan. 22 due to a tragic dormitory fire that killed three Seton Hall students. The Orangemen offered no excuses for the loss.

"Our effort wasn't that good on defense," said Jason Hart, who led Syracuse with 14 points but had no assists. "They just hit some tough shots. You can't allow a team to just sit out there and hit 3-point shots."

But that's exactly what the Pirates did converting 12-of-28 to give them 26 in the last two games and Syracuse didn't. The Orangemen made just 2-of-13 3-pointers.

"We were missing easy shots around the basket," Syracuse coach Jim Boeheim said. "You're playing a good team that's making shots and you've got to make shots."

"The effort was there," said Thomas, who had 14 points and 13 rebounds. "We kept fighting and we kept clawing and scratching. We just didn't come out on top this game."

Rimas Kaukenas had 16 points and Al Harris a career-high 10 for Seton Hall. Shumpert had 12 points and DeShaun Williams 11 for Syracuse, which outrebounded the Pirates 43-29.

Seton Hall, which used some great passing in the first half the Pirates had 10 assists reverted in the second half to the long-range shooting that had crushed West Virginia 97-66 on Saturday.

After Shumpert's three-point play put Syracuse ahead 47-46 with 11:36 to go, the Pirates began hitting 3s. Holloway hit the first, and Ty Shine and Lane each had two to put the Pirates back on top 60-55 with 5:58 remaining.

Williams led Syracuse on an eight-point surge with a steal and fast-break layup and a 3 to move the Orangemen within 64-63. And when Lane missed two free throws, it appeared Syracuse might again escape as it had a week earlier against St. John's.

But even a tremendous save by Williams to Thomas, who then fed Hart for a layup with 1:41 left to keep the Orangemen's hopes alive was not enough.

"We knew it was going to very tough," Seton Hall coach Tommy Amaker said. "Very rarely is a team going to go undefeated, as good as they are and as tough as they are at home. It's tough to do that. But we also told our guys, `Why not us? Why not our team?"'