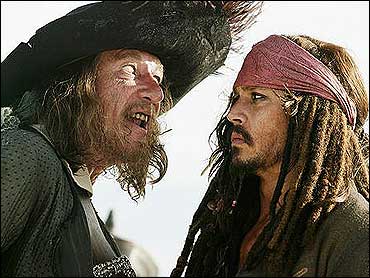 "Pirates of the Caribbean: At World's End" hit an ebb tide in its second weekend but still had enough buoyancy to hold the No. 1 spot at the box office.

With a $43.2 million weekend, Disney's blockbuster sequel sank a steep 62.4 percent from its $114.7 million opening a week earlier, according to studio estimates Sunday.

Universal's romantic comedy "Knocked Up," starring Katherine Heigl as a career woman who gets pregnant from a one-night stand with a slacker (Seth Rogen), debuted a strong No. 2 with $29.3 million. The movie's weekend gross equaled its entire production budget.

"It looks like a lot of people wanted to get knocked up this weekend," said Paul Dergarabedian, president of box-office tracker Media By Numbers.

MGM's thriller "Mr. Brooks," with Kevin Costner as a mild-mannered businessman who moonlights as a serial killer, premiered in fourth place with $10 million.

Picturehouse's sports tale "Gracie," featuring Elisabeth Shue in a film inspired by tragic events in her own life and her teenage days as the only girl on a boys soccer team, opened at No. 7 with $1.4 million.

The big drop for "Pirates of the Caribbean" was typical of summer flicks that open to colossal numbers. In the second weekend, Sony's "Spider-Man 3" tumbled 62 percent from its record $151.1 million debut, while DreamWorks Animation's "Shrek the Third" fell 57 percent from its $121.6 million opening.

While big films once had longer shelf life, most blockbusters today aim to pack in the crowds the first weekend before audiences move on to the next hit. By the second weekend, most people who wanted to catch a big movie already have seen it.

With its mix of serious themes and bawdy humor, director Judd Apatow's "Knocked Up" became a rare R-rated comedy to click with a mainstream audience, much as his "The 40-Year-old Virgin" did two years ago. Most Hollywood comedies have a softer tone to land a PG-13 rating.

"This could not be reduced to PG-13 just to get a broader audience. It would have lost the beauty of the whole film," said Nikki Rocco, head of distribution for Universal. "It's amazing how Judd hits the exact buttons of what average people go through in their lives."

Overseas, "At World's End" did an additional $105.4 million over the weekend to bring its worldwide total to $625.3 million.

Domestically, the movie has grossed $216.5 million, trailing last summer's "Pirates of the Caribbean: Dead Man's Chest," which had a $135.6 million opening and had taken in $258.4 million after its second weekend.

"Shrek the Third" took in $26.7 million domestically to lift its total to $254.6 million. It is rolling out gradually overseas.