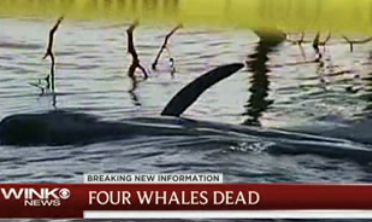 FORT MYERS BEACH, Fla. - - The U.S. Coast Guard has stopped boat traffic in an area of southwest Florida where a pod of pilot whales stranded.

On Monday, two whales died and two others were euthanized after beaching themselves south of Lover's Key near Fort Myers.

"There were attempts made to re float the animals to encourage them out but they just re-beached," said biologist Denise Boyd.

CBS affiliate WINK reports that numerous agencies have been out on the water trying whatever they can to save the whales. They say the biggest challenge right now is actually reaching the mammals in the extremely shallow water. Officers say the outlook isn't good.

"Very lethargic, they don't seem to be really responding well to boats or being in the shallow water," said Boyd.

The News-Press of Fort Myers reports officials saw one whale swim out to the Gulf of Mexico on Monday evening. At least nine others remained Monday night.

Blair Mase, a regional stranding coordinator for the National Oceanic and Atmospheric Administration's Fisheries Service, says necropsies will be performed on the dead whales. She says the surviving whales are listless and emaciated.

Farther south, officials were monitoring another two dozen pilot whales off the coast of Collier County.

In December, more than 50 pilot whales stranded in Everglades National Park, some of whom died.