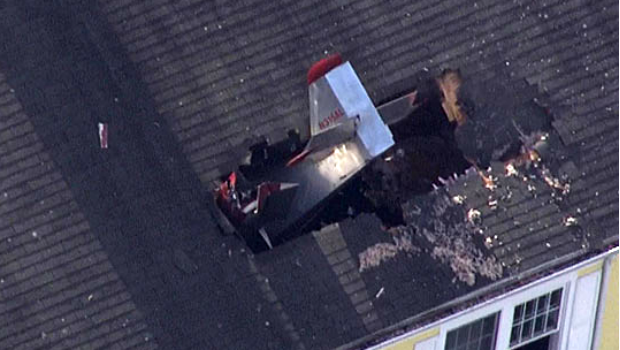 METHUEN, Mass. -- A pilot was killed Tuesday afternoon after a small plane crashed into an apartment building.

CBS Boston reports the crash happened just before 1:30 p.m. in the city of Methuen, about 30 miles northwest of Boston. There are no reports of any other casualties or injuries.

Methuen Mayor Stephen Zanni did not identify the pilot, but said he was a former city councilor in Newburyport. CBS Boston later confirmed his name is Al Lavender, who served one term as mayor of Newburyport.

In a statement, the Federal Aviation Administration said the pilot was attempting to land the plane when it went down.

“A Sonex aircraft crashed in a residential area in Methuen, MA at about 1:25 p.m. today,” the FAA said. “The FAA will investigate and the NTSB will determine the probable cause for the accident.”

The building was on fire following the crash, police said. All residents were able to safely escape the 12-unit building. No one was home in the apartment where the plane came to a rest.

One woman on the first floor said parts of her ceiling came crashing down on her when the plane hit the building.

Vera Kimball lives in the condominium complex, and said she heard “a big and loud noise, nothing like I ever heard before.”

“Then all of a sudden all the smoke alarms went off, and I went outside my back, and stuff was coming off the roof,” Kimball said. “It was the insulation.”

“We just got out, we automatically got out,” she continued. “We smelled smoke. You couldn’t stay in, because the noise from the smoke alarms. They all went off the 12 units. And then we came out, and they wouldn’t let us go back.”

The tail of the plane could be seen sticking out of the roof of the three-story complex.

Rich Ward was driving on Interstate 495 South when he saw the plane in flames in the air.

“I’ve never witnessed anything like that in my life. I can’t get it out of my head,” Ward told CBS Boston.

Keith Lontine lives less than a mile from the apartment building. He told CBS Boston he did not see flames coming from the plane before it crashed.

“I watched it fall out of the sky,” said Lontine.

“I did not hear the impact. As a matter of fact, I didn’t know if I was seeing things,” Lotine said. “I was looking for smoke, I ran right up to the building, I didn’t see any smoke right away. Then all of a sudden, I seen people running out of the building, I heard sirens, and I just knew.”

Vincent Aprea, an experienced pilot who flies in the area, said the Sonex aircraft is known to have problems with the engine overheating.

“The Sonex aircraft is designed as a motor glider,” said Aprea. “It’s designed to take off, fly like a conventional airplane, and then with the power off, meaning the motor shut down, glide to a landing.”

The plane was described as an “experimental” aircraft.

In 1999, a plane with four people on board lost power after takeoff and crashed in the same apartment complex. The plane came to a rest against the building and no one was seriously injured.