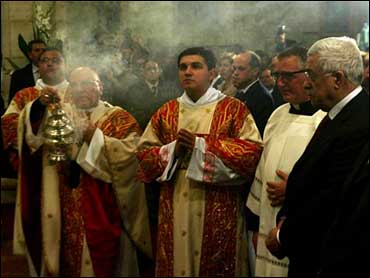 A steady stream of worshippers braved cold, rainy weather Sunday to celebrate Christmas in Bethlehem, where spirits were lifted by the largest turnout of foreign pilgrims in years.

Despite the foul weather, Bethlehem residents had reason to smile. About 30,000 pilgrims converged on the birthplace of Jesus for Christmas celebrations this year, Israeli officials said, about twice as many as last year and by far the highest turnout since fighting broke out in September 2000.

Although the crowds remain a fraction of the peak years in the mid-1990s, the influx of tourists reflected the improved security situation. Israel and the Palestinians declared a cease-fire last February, bringing a sharp drop in bloodshed. Israel's recent withdrawal from the Gaza Strip also has buoyed spirits.

In Christmas messages, the Israeli and Palestinian leaders both expressed wishes for peace in 2006.

Latin Patriarch Michel Sabbah, the top Roman Catholic envoy in the Holy Land, spoke of the new atmosphere in the air in his midnight Mass address and urged both sides to put a final end to violence.

"There seems to be a new Palestinian and Israeli political reality, despite the many complications and hesitations that surround it," Sabbah said. "Leaders with good and honest intentions can make of this new era a time of new blessings ... stopping the past to make room for a new future begin."

This year's festivities brought a long-missing sense of holiday cheer to Bethlehem. For the first time in six years, restaurants were crowded, souvenir sales were brisk and hotels were full of tourists.

"This was a very, very exceptional Christmas," said Abdel Rahman Ghayatha, the Palestinian police commander in downtown Bethlehem. "We did not expect this big a turnout of people, especially in light of the rain and cold. It was very exceptional and very orderly."

Several thousand tourists poured into Bethlehem on Sunday for services in the Church of the Nativity compound, above the grotto where Jesus is believed to have been born. Worshippers lined up outside the packed churches waiting to get in, a contrast to the sparse turnouts of previous years.

Nearby Manger Square was turned into a makeshift parking lot, filled with dozens of vehicles, while a steady stream of buses took cover in an underground lot.

Israeli Prime Minister Ariel Sharon called local Christian leaders on Saturday to wish them a merry Christmas, saying he hopes the new year will bring Israel and the Palestinians peace and security.

But he also criticized Israel's massive West Bank separation barrier, which divides Bethlehem and blocks access to neighboring Jerusalem. Israel says the barrier is needed to stop suicide bombers, but the Palestinians say the structure, which dips into the West Bank in many places, amounts to seizure of land they claim for an independent state.

The Palestinians "are seeking a bridge to peace instead of Israeli walls," Abbas said in a televised speech Saturday. "Unfortunately, Israel is continuing with its destructive policy ... (and) transforming our land into a big jail."

The barrier put a damper on the Christmas spirit, preventing tourists from walking into town on the biblical-era route likely used by Jesus and Mary. Instead, they were forced to enter through an Israeli checkpoint.

"The wall has got to go. It's a wall of shame. Jesus is a uniter not a divider," said James Elsman, a 69-year-old lawyer from Detroit, a placard saying "Trust Jesus" draped over his shoulders.