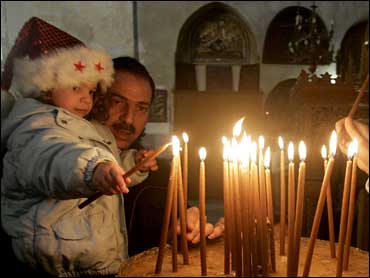 Gloom was banished from Christmas celebrations in Bethlehem for the first time in years on Monday as Christian pilgrims from all over the world came to Bethlehem to celebrate Jesus' birth in an atmosphere of renewed tranquility.

After Israeli-Palestinian fighting erupted in 2000, nearly all the people milling around Manger Square in the center of the biblical town on Christmas had been local Palestinians. But this year, city hotels were packed with tourists.

Tiago Martins, 28, from Curitiba, Brazil, said he was visiting Jesus' traditional birthplace for the first time after new peace talks between Israelis and Palestinians reassured him he'd be safe.

"The idea that it's a Christian city makes me more calm, and I think going to the West Bank is more comfortable since Annapolis," Martins said, referring to the Mideast peace conference held in the U.S. last month. He spoke as he prepared to cross into Bethlehem from Jerusalem.

Priests and monks, tourists, Palestinian families and Palestinian police mingled in Manger Square outside the Church of the Nativity, the site where tradition holds Christ was born. Vendors hawked beads, inflatable Santas, roasted peanuts and Turkish coffee, as city residents watched the festivities from balconies and rooftops.

A four-story tree, strung with white lights, hung with red and gold globes and topped with a yellow star, towered outside the church.

Children and teenagers strolling through the square wore red-and-white Santa Claus hats, and on occasion, full Santa regalia. Balloons bobbed from vendors' stands and strings children clutched in their hands.

Palestinian scouts, some wearing kilts and berets adorned with pompons, marched through the streets playing drums and bagpipes.

In Manager Square, Palestinian President Mahmoud Abbas greeted visitors with a message of hope that his peace talks with Israeli Prime Minister Ehud Olmert will bring about an independent Palestinian state in the coming year.

Meanwhile, the call to prayer that flowed forth from mosque loudspeakers filled the air in a reminder of the Holy Land's prominence for the major monotheistic religions.

"If you can't be with family, it's good to be here where it all went down," said David Collen, 23, of Hickman, Nebraska, who is studying Middle Eastern studies at Tel Aviv University in Israel.

Police presence was heavy, and before celebrants started flowing in, bomb squads walked through the streets sweeping cars and buildings for explosives. In the square, police carried rifles and batons.

Tourism, the economic lifeline in this city of 30,000, has been battered by Israeli-Palestinian clashes, the complex of towering concrete walls and fences Israel is building to separate itself from West Bank Palestinians, and infighting among rival Palestinian factions.

But this year, with the lull in fighting and resumption of peacemaking, Bethlehem Mayor Victor Batarseh predicted about 65,000 tourists would visit — four times the number who trickled into town for Christmas 2005.

"This year is much better than the last seven years for tourism," said shopkeeper Jacques Aman, whose wooden handicrafts shop offered crosses, rosaries and nativity scenes. "The atmosphere is better in general. There is relative calm, from the security standpoint."

Still, unmistakable signs of the conflict that has killed more than 4,400 Palestinians and 1,100 Israelis in the past seven years made it clear that peace was not yet at hand.

Concrete walls measuring about 8 meters (25 feet high) enclose Bethlehem on three sides — part of the separation barrier Israel says it's building to keep out attackers from the West Bank.

Aman, the shopkeeper, said the barrier continues to hurt business. And Palestinian officials allege that the enclosure, which dips into the West Bank, is a thinly veiled land grab.

Latin Patriarch Michel Sabbah, the Roman Catholic Church's highest official in the Holy Land, could only reach Bethlehem after passing through a massive steel gate in the barrier. Israeli mounted policemen escorted Sabbah, in his flowing magenta robe, to the gate, and border police clanged it shut behind him.

Inside Bethlehem, Sabbah delivered a politically charged appeal for peace and love in the Holy Land — and independence for the Palestinian people.

The Holy Land "is a land of war and conflict, and a land of humiliation of one people at the hand of another," said Sabbah, the first Palestinian to hold his position.

"God wanted this land to be a land for all — Jews, Christians and Muslims," he said. "Every state that is established in this land, be it Israeli or Palestinian, must understand the sweeping nature of this Holy Land, in order to be able to host whoever lives here."

In the impoverished Gaza Strip, festivities in the tiny Christian community of 3,000 were decidedly muted.

Once, Christmas had been marked by a decorated tree in Gaza City's main square, colored lights strung across the plaza and Christmas carols ringing out from loudspeakers. But this cheer evaporated with the outbreak of fighting between Israelis and Palestinians in late 2000.

The grimness only deepened this year with the assassination of a prominent Christian activist, Rami Ayyad, after Islamic Hamas militants overran the coastal strip in June. There were few outward signs of celebration, and an austere midnight mass was planned at the city's only Roman Catholic church.

Hamas has denied involvement in Ayyad's killing and vowed to find those responsible for his slaying.

Early Monday, hundreds of Gaza Christians lined up at the passenger crossing into Israel, hoping to cross over to the West Bank to celebrate in Bethlehem. Many who hoped to leave said they wouldn't return.

Israel said it would allow in 400 Christmas celebrants from Gaza.