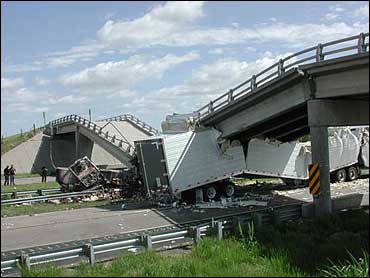 A series of pileups in Maryland and an overpass collapse in Nebraska shut down portions of two major interstates Saturday at the start of Memorial Day weekend, one of the busiest travel holidays of the year.

A 17-mile stretch of Interstate 68 in Maryland reopened Saturday after crews cleared away nearly 90 vehicles from a string of pileups that killed two people and injured dozens more on a fog-shrouded mountain ridge.

"This is absolutely the worst accident scene I've seen in my 27 years as a Maryland state trooper," state police Maj. Vernon Herron said.

In western Nebraska, a 10-mile stretch of Interstate 80 remained closed Saturday after a tractor-trailer slammed into an overpass support Friday night, sending the bridge crashing down onto the truck and killing the driver, 47-year-old Douglas W. Lohmeyer of Blue Springs, Neb.

Interstate 80 runs from coast to coast and is the nation's busiest highway.

Nearly 30 million people are expected on the nation's roads this weekend, according to the AAA. Their prediction was not affected by the government's decision to raise the terror alert to high on Tuesday, though travel industry officials have said terror concerns have made driving vacations more popular than flying.

Herron said the accidents on I-68 started when a truck hit a van and the van overturned in the westbound lanes, starting a series of chain reactions. Someone in the eastbound lanes apparently slowed down to look and was struck, beginning another pileup, Herron said.

Gregory Frank, 45, of Woodbridge, Va., was stopped on his way to a wedding in Pittsburgh with his wife, Michelle, and two children when he heard a series of crashes behind him.

"I told the kids, 'Hunker down,"' Frank said. He said the car beside him was struck from behind and completely crushed.

"One minute it was there, then — Whoomp! — that car was just gone."

Herron said a passenger in that car was one of the two people killed, Regina Daudet, 66, of Centreville, Va. The other, Jason Howell, 26, of Millersburg, Ohio, was killed after leaving his vehicle and jumping a guard rail, state police said. At least 60 other people were injured, including one hospitalized in critical condition Saturday.

Bill Sorah, of Douglassville, Pa., was traveling to visit his parents in Charleston, W.Va., with his wife and two small children when the collisions began. He was able to pull off the road, but his van was almost immediately struck.

He said he was knocked unconscious and woke up in the hospital. His family was uninjured and spent the night at the Red Cross shelter.

"I'm just lucky," he said. "Probably in one fell swoop, it was the best and worst day of my life."