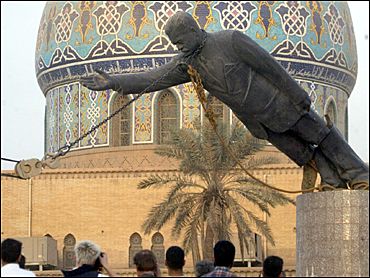 There was a time not so long ago when the Iraqi regime seemed to fall as easily as a statue in a Baghdad square, where an image of that toppling structure became a powerful symbol of operation Iraqi Freedom.

But that picture was followed by images of coffins covered with American flags and now, the gruesome photographs at Abu Ghraib prison - all with dramatic effects that can change the way people think about U.S. military action in Iraq.

"I think that the way we react to a photograph comes from the fact that there is something elemental about seeing," says Mitchell Stephens, a professor at New York University School of Journalism. "Seeing is, in fact, believing."

The Early show correspondent Tracy Smith reports on how images can alter the course of history. Few things have the power to stir our souls - or break our hearts - like a photograph.

Leafing through photos of a mushroom cloud rising 20,000 feet over Nagasaki, Japan, Jack Ruby shooting Lee Harvey Oswald, and firefighters raising the American flag in front of the wreakage left behind on Sept. 11., Smith demonstrates how a nation's history can be told in a few pictures.

"Obviously images don't speak as clearly as words about a lot of things," says Stephens, who wrote a book about the effects of visual media. "But they speak very clearly about heroic things, sometimes, and we see that in the Iwo Jima image from World War II. And they speak very clearly about horrifying occurrences. And we saw that in some of the photos to come out of the Civil Rights movement down south, where the demonstrators were treated so badly by police.

Pictures are powerful, says advertising executive Jerry Della Femina, because "we all put ourselves in the picture." He is in the business of using pictures to motivate people.

"We imagine ourselves behind the wheel of that car, or we imagine that we are having that drink. We're always putting ourselves in photos. We put ourselves into those horrible photos as a nation."

So how do we know when an image is going to make history?

We don't. Sometimes its impact on world events can be seen only in hindsight. But experts say we shouldn't underestimate the power that pictures have to change how we feel, and ultimately, how we act.

"Photos have changed history," Stephens says. "Those of us who were alive during Vietnam remember one photo in particular of a Vietcong leader being shot in the head, and that photo horrified people and contributed to the buildup of anti-war sentiment in this country."

Then, there was the one of a 9-year-old Vietnamese girl running naked from a napalm attack. Even in a still photo, Stephens says, you can hear her crying. And the photo from Kent State of police shooting college students on campus further fueled sentiment against the war.

In Tianenmen Square, courage was summed up in a single frame.

And Rodney King's story of police brutality might never have been told if it weren't for a video camera.

Even Secretary of defense Donald Rumsfeld, who warned Congress last week that there are still more photos and even videos of abuse at the prison that have not yet been seen by the public, said he didn't understand the extent of the cruelty in Iraq's Abu Ghraib prison until he saw the photos.

"You read it and its one thing, " he said. "You see the photos and you get a sense of it, and you cannot help but be outraged."

And while the administration knows the value of positive images, often, it is the ones that are hardest to look at that are even harder to forget.