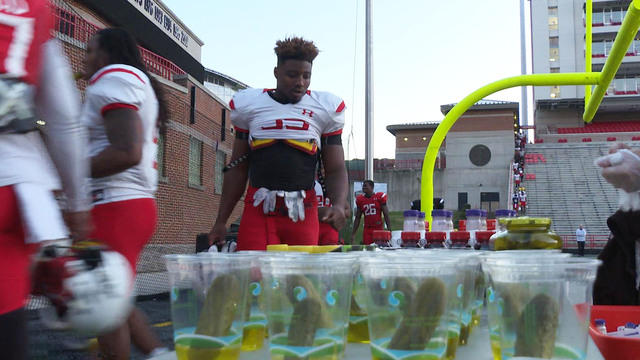 Many athletes rely on brands like Gatorade or Powerade to help with hydration and recovery, but a growing number are now turning to something tangy from a very different section of the supermarket: pickle juice, right out of the jar. Some athletes from high school to college to pro swear by it and experts will tell you it can work, but you may be surprised by how.

After a long practice, it's not what you'd expect to see: University of Maryland football players looking to replenish, reaching for pickles, reports CBS News correspondent Dana Jacobson.

"I actually like to eat the pickle and then drink the pickle juice, you know," said Maryland linebacker Jermaine Carter.

That juice, technically called brine, fights cramps -- at least some athletes say so.

"Definitely noticed a difference, you know. Like I said, you don't cramp as much, you know. You feel more hydrated," Carter said.

Brine is that salty, vinegary, yellow-green liquid that give pickles their flavor.

He thinks pickle brine makes sense if his athletes find it effective.

"I don't know if it's necessarily better than anything specifically, but it definitely gives of a twist of a different taste and a different flavor for guys. I do think some guys swear by it more," Court said.

Blake Coleman swears by it. The New Jersey Devils forward gained attention in October when he was handed a jar of pickles as he came off the ice. He started drinking pickle brine in college when a teammate suggested it.

"Yeah, I still think it's pretty crazy. I would stick with anything that works, though. I've heard it's like a neurological thing where the taste is so sour that it tricks your mind or something like that," Coleman said.

Turns out, Coleman is right.

Performance nutritionist Heidi Skolnik says that it's not salt or nutrients in pickle brine that stops cramps. It's the taste.

She says that it's not salt or nutrients in pickle brine that stops cramps. It's the taste.

"It tastes so awful that's it's interrupting the central nervous system pathway that's creating that cramping. Having something like pickle brine might be so horrendous that it shocks your system and it interrupts that pathway. And that stops the cramping," Skolnik said.

Skolnik says that while pickle brine likely won't hurt an athlete, there are other more practical ways to recover.

"Getting in some carbohydrate, protein, electrolyte mix and eating your meals," she said.

That could be why Blake Coleman's teammates aren't jumping on the brine bandwagon – at least not yet.

"I'm still in a solo camp right now. I got some of the boys that are eating the pickles, but the juice is all mine," he said.