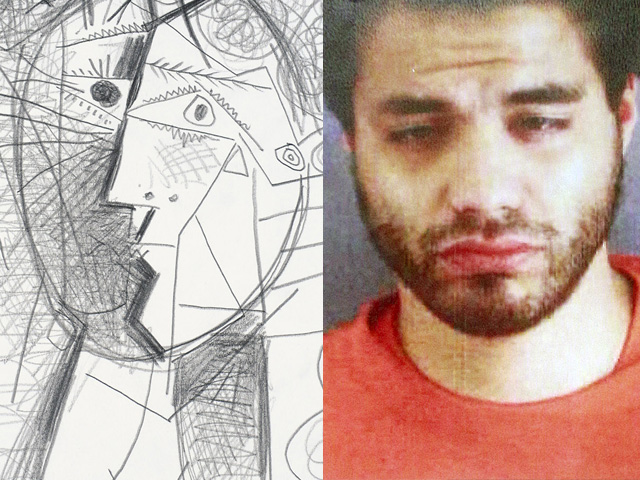 SAN FRANCISCO - The case of a stolen Picasso has been cracked — and police said Thursday it was a New Jersey man who walked into downtown San Francisco art gallery, snatched the drawing and fled in a taxi.

Police arrested Mark Lugo, 31, of Hoboken, N.J., on Wednesday at an apartment in Napa, and found the artwork stripped from its frame. The 1965 pencil-on-paper drawing — titled "Tete de Femme" — was purchased at a spring auction in New York.

It's worth about a quarter of a million dollars.

"I've had some sleepless nights," said Rowland Weinstein, who owns the art gallery. "I feel very, very lucky and very relieved that the Picasso wasn't harmed and will be returned back safely."

Weinstein said he planned to upgrade the street-level art gallery's surveillance system. The drawing was displayed under guard at a news conference at police headquarters on Thursday.

Lugo faces burglary, grand theft and drug charges and is being held on $5 million bail. He has been in the area since July 4, said Police Chief Greg Suhr.

"He had it very nicely and professionally boxed up," he told the San Francisco Chronicle. "If the police had waited just another day, it would have been in a FedEx box somewhere."

After Lugo took the drawing, he hopped in a taxi that took him to a nearby high-end hotel where he had been staying. Police later found the cab driver and traced Lugo to the hotel and later to Napa where he was visiting friends.

Lugo's arrest comes also a day after surveillance video released by Lefty O'Douls, a nearby restaurant, showed a man matching Lugo's description walking by with a piece of framed artwork covered by a newspaper under his arm.

Suhr said the footage played a key role in the arrest.

(At left, watch a report on the footage from CBS' "The Early Show")

The footage surfaced after a local television station asked the restaurant on Tuesday if they may have caught an image of the art thief on its security cameras, owner Nick Bovis said Thursday.

Bovis said they found the suspect on video, printed out some still images and took it over to the gallery where the staff identified the thief. Police arrived about an hour later.

Investigators believe Lugo was working alone and likely planned to ship the artwork to an unknown party.

Weinstein said the artwork is so rare that any buyer who purchased it likely could not have displayed it publicly.

"It's exquisite and beautiful and very typical of (Picasso's) work," Weinstein said. "What I don't know is what (Lugo) intended to do with it. It's very hard to resell to show.

"He either had a buyer or he didn't thoroughly think his plan through," Weinstein said.