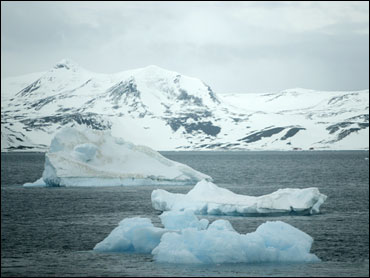 (AP Photo/Roberto Candia)
As the science scandal known as ClimateGate grows, the largest U.S. physicists' association is finding itself roiled by internal dissent and allegations of conflict of interest over a forthcoming review of its position statement on man-made global warming.

The scientist who will head the American Physical Society's review of its 2007 statement calling for immediate reductions of carbon dioxide is Princeton's Robert Socolow, a prominent supporter of the link between CO2 and global warming who has warned of possible "catastrophic consequences" of climate change.

Socolow's research institute at Princeton has received well over $20 million in grants dealing with climate change and carbon reduction, plus an additional $2 million a year from BP and still more from the federal government. In an interview published by Princeton's public relations office, Socolow called CO2 a "climate problem" that governments need to address.

"It is Socolow whose entire research funding stream, well over a million dollars a year, depends on continued alarm over global warming," says William Happer, a fellow Princeton University professor and head of the Happer physics lab who has raised the question of a conflict of interest. The reason: the ostensibly neutral person charged with evaluating a statement endorsing man-made global warming is a leading proponent of precisely that theory whose funding is tied to that theory.

As previously reported by CBSNews.com, Happer and other members of the APS have been urging the society to take a second look at the 2007 statement, which claims the evidence for the CO2-global warming link is "incontrovertible" and "we must reduce emissions of greenhouse gases beginning now." Their letter circulated last month says: "By now everyone has heard of what has come to be known as ClimateGate, which was and is an international scientific fraud, the worst any of us have seen... We have asked the APS management to put the 2007 statement on ice until the extent to which it is tainted can be determined, but that has not been done."

Neither the current APS president, Harvard's Cherry Murray, nor its incoming president, Princeton's Curtis Callan, replied to questions on Thursday, and Socolow could not be reached for comment. The APS leadership has chosen not to withdraw its statement but has authorized a limited review of the language's "clarity and tone" -- although that was announced before the embarrassing leak from the University of East Anglia's Climatic Research Unit occurred.

Hal Lewis, a professor emeritus of physics at the University of California, Santa Barbara who has been an APS member for 65 years, says that he asked both the current and incoming APS presidents to require that Socolow recuse himself from a review of this subject, and both refused.

That means the review will be "chaired by a guy who is hip deep in conflicts of interest, running a million-dollar program that is utterly dependent on global warming funding," Lewis says. In addition, he points out that the group charged with taking a second look at the 2007 statement, the Panel on Public Affairs, is the same body that drafted it in the first place. That, "too has a smell of people investigating themselves," Lewis says.

The APS ethics policy that appears to apply to Socolow's panel says "it is particularly desirable that members" be "free from real or perceived conflicts." An APS ethics policy used when awarding prizes says that conflicts of interest can be resolved, depending on the circumstance, by "resignation of one or more members of the committee, withdrawal of a member from parts of the committee's deliberations and voting." And when involving the chairman: "Potential conflict of interest involving the chair of the selection committee is ipso facto a serious matter, and at the least another committee member should take over as chair."

An APS spokeswoman did not respond to a request for comment on Thursday about how the group's ethics policies apply and whether Socolow would be the chairman.

As the full import of the ClimateGate leak became evident, Happer, Lewis, and others redoubled their efforts to ask APS members to support a review of what they considered to be bad science. They now say 77 supporters are fellows of major scientific societies, 14 are members of the National Academies, and one is a Nobel laureate; Happer adds that "some have accepted a career risk by signing the petition."

APS President Cherry Murray replied to that effort with a stiff letter to all members saying the message was sent without "APS knowledge or approval" and the group is "continuing to investigate how the senders obtained APS member e-mail addresses."

Murray also said the United Nations' Intergovernmental Panel on Climate Change is "in the process of investigating the affair," and APS will wait until the results of that investigation are public. But that doesn't seem to be accurate: IPCC chairman R.K. Pachauri said in Copenhagen this week that there is "not an investigation." And there's no mention of an investigation in either IPCC statement, both of which defend the East Anglia research that has been called into question.

What irks the APS members circulating the petition are not claims that CO2 has been increasing for a century and that the Earth is warming; Lewis says the planet has been warming for thousands of years without our help, especially since the Little Ice Age a few hundred years ago. Instead, the physicists are concerned about the APS's claim that the science is settled on the question of the causal link between the two -- a claim that underpins the Copenhagen conference, the Democratic cap and trade proposals, and the EPA's announcement this week that CO2 is dangerous to human health.

Socolow leads the Princeton Environmental Group's Energy Group, one of the university's research units. According to a list of its reports and publications, the group is now focused on topics including fuels with "near-zero" greenhouse gas emissions and "carbon dioxide capture" technologies, both of which become of economic interest if a causal link between CO2 and global warming can be shown to exist.

The current chair of the APA Panel on Public Affairs, or POPA, is Duncan Moore of the University of Rochester, and Socolow will take over in three weeks, on January 1. A subcommittee will be tasked with looking at the 2007 statement for "clarity and tone," and is expected to report its recommendations to the full POPA committee by early February.

Moore told CBSNews.com on Wednesday that "we will only look at tone and clarity and will not rewrite the 2007 statement," and a discussion about "whether APS should form a committee to look at the role of APS in climate change" will take place at the February POPA meeting.

Meanwhile, the ClimateGate scandal is broadening, with more mainstream scientists being concerned about what the leaked e-mails and apparently buggy computer code say about their chosen profession, and how they could influence public perceptions of science. The two leading science publications, Scientific American and Nature chose to downplay the scandal's impact, with Nature saying the leak was a "propaganda windfall" to the "climate-change-denialist fringe" -- an especially unflattering term that seems to sweep in the APS physicists asking for the re-review.

Petr Chylek, a fellow at the Los Alamos National Laboratory and an adjunct professor at New Mexico State University, said in an open letter that climate scientists "have substituted the search for truth with an attempt at proving one point of view." And 141 scientists have signed a statement at CopenhagenClimateChallenge.org that says actual evidence of human-caused global warming is lacking and "unproven computer models of climate are not acceptable substitutes for real world data obtained through unbiased and rigorous scientific investigation."

Happer, the Princeton University physicist who jointly circulated the letter to APS, says: "APS has simply circled the wagons, while trying to figure out how to quieten the growing unrest in the membership."

Declan McCullagh is a senior correspondent for CBSNews.com. He can be reached at declan@cbsnews.com and can be followed on Twitter as declanm. You can bookmark Declan's Taking Liberties site here, or subscribe to the RSS feed. Before becoming a CBS employee, Declan was chief political correspondent for CNET, a reporter for Time, and Washington bureau chief for Wired.