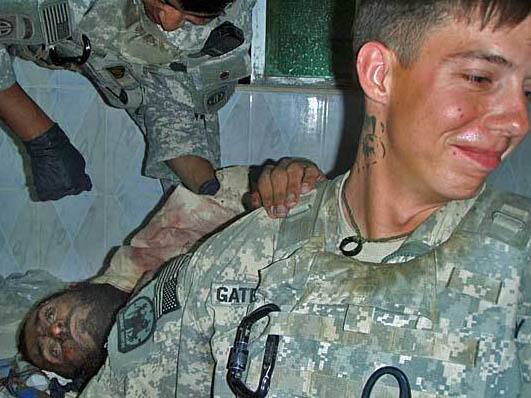 Top U.S. military and civilian officials rushed to condemn the soldiers' actions Wednesday, calling them repugnant and a dishonor to others who have served in the conflict. The Army said an investigation is under way.

The photos were published in Wednesday's Los Angeles Times. It said one of the photos shows members of the 82nd Airborne Division posing in 2010 with Afghan police and the severed legs of a suicide bomber. The same platoon a few months later was sent to investigate the remains of three insurgents reported to have accidentally blown themselves up -- and soldiers again posed and mugged for photographs with the remains, the newspaper said. A photo from that incident appears to show the hand of a dead insurgent resting on a U.S. soldier's shoulder as the soldier smiles.

A soldier in the division's 4th Brigade Combat Team, which is stationed in Ft. Bragg, N.C., gave the paper 18 photographs, claiming they indicated a breakdown in leadership and discipline that could compromise troop safety, according to the Times.

The photos are the latest in a series of blows to the U.S. military image in Afghanistan. In January, U.S. Marines were found to have made a video of them urinating on Afghan corpses. In February, what the military said was the accidental burning of Qurans triggered violent protests and revenge killings of six Americans. And last month, a U.S. soldier left his base and allegedly killed 17 civilian villagers, mainly women and children.

"Anyone found responsible for this inhuman conduct will be held accountable in accordance with our military justice system," Little said.

At a news conference after a meeting of NATO foreign and defense ministers in Brussels, Panetta, who apologized on behalf of the Department of Defense and the U.S. government, told reporters he "strongly condemns" the behavior exhibited in the photos and encouraged a strong investigation, which is already under way. But Panetta also said that in war, young people "can make foolish decisions." He said he is not excusing the behavior but does not want the incident to bring more harm to U.S. troops in Afghanistan.

At the White House, President Barack Obama's chief spokesman, Jay Carney, echoed Panetta's comments, saying the incident was "reprehensible." It was the latest in a series of recent Afghan battlefield embarrassments for the United States, and it came at a time when Washington is still working with President Hamid Karzai in Kabul to smooth over strained relations.

Carney said the picture-taking incident does not represent the standards of the U.S. military and said that Obama believes the situation needs to be investigated and those responsible held accountable. He said he didn't know if the president had seen the photos.

The U.S. commander of NATO forces in Afghanistan, U.S Marine Gen. John R. Allen, also criticized the troops. He said there is a strict policy for the handling of enemy remains and it dictates they be processed as humanely as possible.

"The incident depicted in the LA Times' photographs represents a serious error in judgment by several soldiers who have acted out of ignorance and unfamiliarity with U.S. Army values," Allen said, adding that commanders "will collaborate with Afghan authorities and carefully examine the facts and circumstances shown in these photos."

"Such actions are morally repugnant, dishonor the sacrifices of hundreds of thousands of U.S. soldiers and civilians who have served with distinction in Afghanistan, and do not represent the core values of the United States or our military," Crocker said.

Little said the military had asked the Los Angeles Times not to publish the photographs. "The danger is that this material could be used by the enemy to incite violence against U.S. and Afghan service members in Afghanistan," he said.

There was no immediate reaction from Afghan authorities.

In its story, the newspaper quoted editor Davan Maharaj saying: "After careful consideration, we decided that publishing a small but representative selection of the photos would fulfill our obligation to readers to report vigorously and impartially on all aspects of the American mission in Afghanistan, including the allegation that the images reflect a breakdown in unit discipline that was endangering U.S. troops."

Many troops take photos -- and some take these `trophy' photos -- of their tours of duty on the battlefield. And the practice has harmed war efforts in both recent campaigns in Iraq and Afghanistan.

The most notorious case was that of Abu Ghraib, an Iraq prison where members of the Maryland-based 372nd Military Police Company photographed themselves physically and sexually abusing detainees. Photos showed them holding one prisoner on a dog leash, another with a prisoner hooded and wires attached to him in a mock electrocution, another with naked prisoners stacked in a pyramid.

Release of the photos in 2004 fostered international condemnation. It complicated international relations for the U.S. and provoked debate about whether harsh interrogation techniques approved by the Pentagon amounted to torture. In all, eleven U.S. soldiers were tried and convicted of crimes and five others were punished administratively. Punishments for the 16 included reprimands, hard labor, demotions, fines and up to 10 years in prison for one soldier.

In the more recent incident -- the video of Marines urinating on Afghan corpses -- two separate investigations have been completed and are being reviewed by the commander of Marine Corps Combat Development Command, Lt. Gen. Richard Mills. One investigation was done by the Naval Criminal Investigative Service to determine whether any crime was committed; the other was a command probe aimed at determining what happened and why. No action has been taken against the Marines pending the review of the investigations, according to Marine Corps officials.