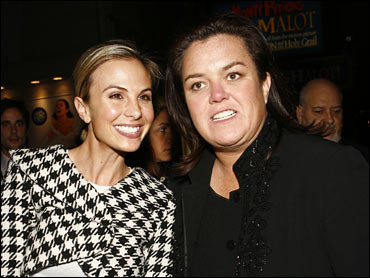 Promotional photos of Elisabeth Hasselbeck that hang in "The View's" offices have been defaced, according to the network. It doesn't appear that Hasselbeck's sparring partner, co-host Rosie O'Donnell, is to blame.

Janette Barber, Rosie O'Donnell's chief writer, was escorted from the building after she was caught drawing moustaches on the photos, the New York Post reported Friday.

"Photographs at The View's offices were defaced (Thursday). Rosie O'Donnell was not in the building," a statement released by ABC said. "ABC Legal and Human Resources are investigating the matter."

The newspaper reports that Barber is an old friend of O'Donnell who worked with her on "The Rosie O'Donnell Show."

The Post says there are rumors that O'Donnell was so angry after her fight with Hasselbeck that she trashed her dressing room, although ABC has denied the report.

O'Donnell was not on the show Thursday because she was celebrating her partner's 40th birthday. The newspaper reports that O'Donnell is expected back at her post on Tuesday after the long holiday weekend.

There has been talk that O'Donnell will leave the show before her scheduled date in June. Yesterday she posted a message on her blog that said, "photographers again waited yesterday, by the ramp at abc, extra extra, the line between fake and real."

O'Donnell may have been referring to Hasselbeck's interview with TV's "Extra"in which she said, "I am fine. We are used to debating things there. You have women who care a lot about things."

Even before the fight, O'Donnell posted a message that said she wants to "move on" from the show.

Her posts seemed a little more upbeat on Friday, when she posted a video that showed photos of her time with Barbara Walters and Hasselbeck on "The View," a retrospective of sorts.