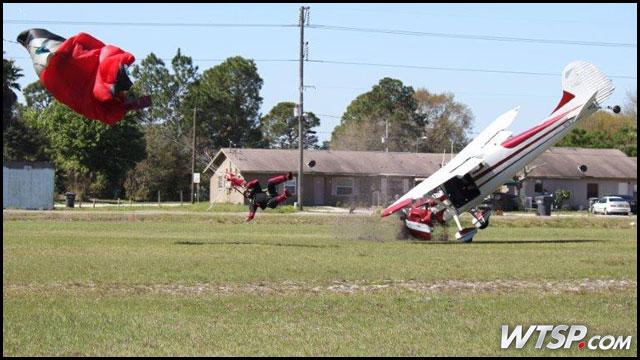 MULBERRY, Florida - A plane and a skydiver collided at an airfield near Lakeland Saturday, and amazingly both survived with minor injuries.

On Trembley's third pass, the passengers-side wing of his plane became entangled and then cut the strings of skydiver John S. Frost as he was descending.

Both were less than 75 feet in the air.

Frost was flipped and then flung to the ground, while Trembley's plane nosedived.

Photographer Tim Telford happened to have a camera at the ready, and he caught the entire incident.

"Thought I'd have very exciting pics of a close flyby," Telford told WTSP. "Never in a million years did I think I'd see what I saw."

Both men were transported by ambulance to Lakeland Regional Medical Center. Frost was treated and released, while Trembley was held for observation. Neither were seriously hurt.

Telford told WTSP he thought is was a a miracle: "The plane caught the side of the canopy, flipped the plane 180 degrees and flipped the skydiver into the air. You heard the airplane hit the parachute, which sounded like you falling on your face into your pillow; a 'woof' sound."