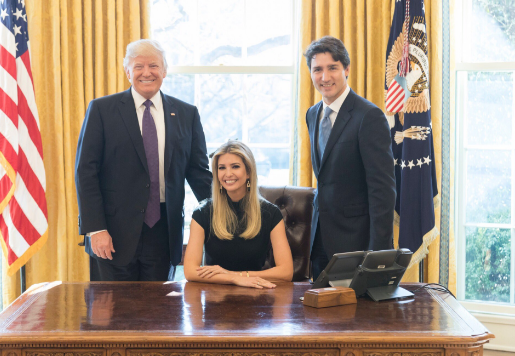 NEW YORK -- A photo of Ivanka Trump sitting in the president’s Oval Office chair has raised some eyebrows on Twitter.

The picture, which Ivanka tweeted on Monday, shows her sitting in the chair with Canadian Prime Minister Justin Trudeau and her father, President Donald Trump, standing behind her.

“A great discussion with two world leaders about the importance of women having a seat at the table!” she tweeted with the picture.

Some objected to the image or used it to criticize Ivanka.

“The Oval Office should not be a prop for the president’s daughter,” one user tweeted.

“You have no business in the White House,” posted another. “Our country is not run on nepotism.”

Others, however, applauded her.

“Ivanka is truly a roll [sic] model for all women!” one user wrote.

This is not the first time civilians have sat in the president’s chair. Photos taken during Barack Obama’s presidency show children sitting behind the desk in the Oval Office.