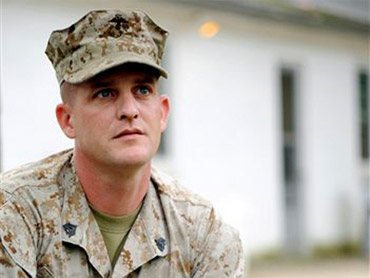 On a sultry day in July 2008, Marine Sgt. David W. Budwah strode in his battle fatigues to the front of a picnic pavilion to tell three dozen young boys what he did during the war.

With his clear gaze, rigid posture and muscled, tattooed arms, Budwah looked every inch the hero he claimed to be. He said he was on his second tour of duty in Afghanistan when a homemade grenade exploded, wounding his face and arm when he dove to shield a buddy from the blast.

He urged the boys, ages 9-12, to take pride in themselves, their country and its warriors.

"We're here to make sure of the freedom you have every day," Budwah told his audience at Camp West Mar, a wooded American Legion compound about 60 miles northwest of Washington.

Spencer Shoemaker, then 10, was so impressed he had his picture taken with Budwah and kept a treasured newspaper clipping about the visit.

"What he said made me feel like I wanted to join the Marines," Spencer said.

But the Marines say Budwah is a liar, a fraud and a thief. They are court-martialing the 34-year-old Springhill, La., native, alleging he was never in Afghanistan, wasn't wounded and didn't earn the combat medals he wore - or the many privileges he enjoyed.

Budwah joined the Marines in October 1999 and spent nearly all of the next six years with a radio communications unit in Okinawa, Japan, according to the Marine Corps Base in Quantico, Va., where Budwah has been stationed since February 2006.

Their very prevalence exposes something else - a nation so eager to embrace its war fighters, especially the wounded, that it sometimes fails to discern between the real heroes and the fakes.

"In every society in history, the warrior is glorified," said phony-hero debunker B.G. "Jug" Burkett of Plano, Texas. "The second you say you're a warrior who has performed heroically in combat, everybody perceives you differently."

Burkett, 65, a Vietnam veteran and author of the 1998 book, "Stolen Valor," said the urge to honor the wounded can cloud one's judgment.

"I tell reporters that when you've got a guy who's vocal - 'Let me tell you how I won my Silver Star' - your antenna should go up," Burkett said. "The real guys typically don't talk about it."

Budwah's case is remarkable because he is an active-duty Marine facing military justice, not a civilian charged with wearing unearned medals. Of nearly 3,100 courts-martial last year in the four major armed services, only 27 were trials for wearing illegal decorations. Just two involved Marines.

He faked post-traumatic stress disorder in hopes of leaving service early and was sent to the National Naval Medical Center in Bethesda, where he bluffed his way into 33 events from late July through November 2008, according to charges obtained by The Associated Press through an appeal of its Freedom of Information Act request.

Bethesda hospital spokesman Chris Walz said the staff tries to involve as many patients as possible in such activities, which range from free NFL tickets to speaking engagements like Budwah's at Camp West Mar.

The charges include making false official statements, malingering, misconduct and larceny. Budwah faces up to 31 1/2 years in prison and a dishonorable discharge if convicted on all eight counts at a trial set for Oct. 20. at Quantico.

Budwah, who declined to enter a plea at his Aug. 5 arraignment, denied wrongdoing in a brief telephone interview in April. "The allegation is not even true," he said, declining to comment further.

Recent prosecutions of active-duty service members include Dontae L. Tazewell, a Navy hospital corpsman sentenced in January 2008 in Norfolk, Va., to two years in prison for wearing an unearned Purple Heart and other decorations. Tazewell falsely claimed he had rescued six Marines and recovered the bodies of four others in Iraq.

Prosecutors portrayed him as a failing sailor so desperate to remain in service that he fabricated the story.

Navy corpsman Robert White, got 45 days in the brig after pleading guilty in December at Great Lakes Naval Station, Ill., to wearing a Purple Heart he bought. A former girlfriend testified White obtained the medal after he was shunned by his peers for assaulting her, the Navy Times reported.

People fabricate military injuries for many reasons, including laziness, greed, sympathy and psychosis, said Loren Pankratz of Oregon Health & Science University, who wrote about PTSD impostors in his book, "Patients Who Deceive."

"A more common theme would be somebody who would represent sort of the antihero - the guy who's given his all and yet been abused and misunderstood," Pankratz said.

Walter E. Boomer, who served as assistant commandant of the Marine Corps from 1992 to 1994, vaguely remembers meeting Budwah in November when they were guests at a Grand National Waterfowl Association benefit on Maryland's Eastern Shore. They shot at ducks, drank and dined with other VIPs and shotgun manufacturing executives.

"I accepted his story at face value," Boomer said. "Nothing that I recall would have set off alarm bells."

Budwah again managed his way to the center of attention at a September 2008 boxing event in Glen Burnie, Md. Organizer Scott Wagner said the highlight of the night was when he brought Budwah and dozens of other military hospital patients into the ring for a standing ovation.

"Were they injured or not? I don't know and I really don't care. If half of them were injured, I still feel good about it," he said.

A year after Budwah's speech to the youngsters at the American Legion camp, Spencer Shoemaker sat stunned in the family's kitchen as he read the charges against his Marine idol for the first time.

"Well, it's better that I know," the boy said after a long silence. "It did tear me down, but I'll still join the Marines."

His father Michael, a construction worker, seethed at the news about Budwah.