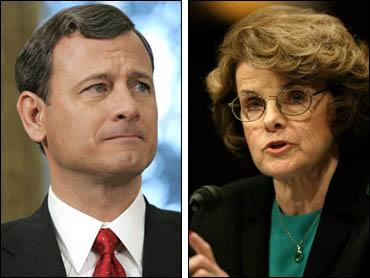 
Dumb coincidence can be a fine betrayer of irony.

One of those coincidences jumped out at me Tuesday from the op-ed page of The Washington Post. In the upper right, appropriately, George Will filleted Sen. Dianne Feinstein's declaration of opposition to Judge John Roberts. You can detest Will and despise Roberts and still appreciate the new age absurdity of Feinstein's public narcissism.

Rather than talking to me as a son, a husband, a father – which I specifically requested that he do. He gave a very detached response."

"I also asked him about how he planned to be in touch with "the problems real people have out there?"

And once again, rather than discussing the importance of reaching out to communities that he normally would not be in contact with, and spending time to understand the problems that average people face, in my communities of Hunters Point, of East L.A., of some of the agriculture areas of our state, he mentioned the attendance at soccer games with his family. Now, that is a slice of life, true, but it is a very narrow slice of life.

His answer failed to recognize the point of the question and the concern about staying in touch with people who have different life experiences."

Will's response: "At the risk of revealing a serious empathy deficit, one might ask: What is the importance of a Supreme Court justice's understanding the problems of lettuce farmers in California's Central Valley?"

Coincidence shows us that Feinstein's superficial schmaltz is not aberrational.

Columnist Richard Cohen, inappropriately placed on the right side of the Post's op-ed page, mimicked and rationalized the Feinsteinian empathy:

If I were in the Senate, I'd vote no on Roberts -- not because I think he's unqualified intellectually to be the next chief justice but because I fear an easy life has led him to easy answers. Judge Roberts will surely get his seat on the high court. He was virtually born to it."

Aha! So if Roberts had a tougher life, he'd get the Cohen nod. I presume it then follows that Cohen heartily supported Clarence Thomas. And if Cohen came to know that Roberts, like every single homo sapiens I've ever met, actually has been through some profound sadness or adversity in life, would he then change his position?

To my mind, it's astounding that Feinstein and Cohen are explicitly demanding that Roberts perform that kind of phony-baloney, I-feel-your-pain political theater that the American BS-meter detects with the precision of a laser. If he had jumped through empathy hoops, they would have liked him.

Tolerating such charades has a cost. Witness President Bush, who has spent the past few days jumping through similar empathy hoops. He was monitoring the federal response from the U.S. Northern Command in Colorado, then went off to comfort the afflicted on the Gulf.

This was pure phony-baloney, I-feel-your-pain political theater. Yet it was enough to make prominent assessors like George Stephanopoulos say on his show, "going back to President Bush, this is clearly he had a good weekend here, showing his response…"

In what possible, meaningful way, did Bush have a good weekend? He pulled off some timely photo-ops. And he performed kabuki atonement for not providing good photo-ops during Katrina.

So from Feinstein to Cohen to Stephanopoulos to Bush, we see a political culture -- a political establishment -- demanding and approving of the most superficial exercises of public empathy, happy to substitute it for thought or action.

Dick Meyer, was a political and investigative producer for CBS News, is the Editorial Director of CBSNews.com, based in Washington.