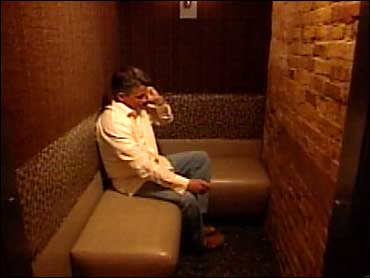 You don't see old fashioned phone booths too much anymore, partially because just about everyone has a cell phone these days. But, as CBS News correspondent Cynthia Bowers explains, they could be making a comeback — with a twist.

A few months ago Rob Katz and Kevin Boehm joined the growing ranks of restaurateurs giving their diners a private space to make or take those can't-miss calls.

"There is no such thing as a dinner for two as long as their cell phone are on," says Boehm.

But they won't snatch people's phones away if they are being loud at the table. "I think that would end up in violence," Boehm explains, laughing. "All we can do is allow them an option."

And if you can't carve out a niche like the one in Katz and Boehm's eatery, you can buy a cell phone booth online.

This concept is catching on at a time when Americans are increasingly policing themselves when it comes to calls in public places. A recent survey finds that only one in five of us thinks it is appropriate to talk at the table.

"The survey that we have done indicates that American consumers are sick and tired of people occupying their spaces, trespassing on their spaces, and constantly talking at the wrong places," says Delly Tamer, the CEO of Letstalk.com.

And at the wrong times. During her interview with Kevin Boehm, Bowers' cell phone rang.

"That is my cell phone. How embarrassing is that?" the correspondent confessed.

"Are you serious? You gotta leave," Boehm joked. "I am shocked! I would have pushed you to the cell phone booth."

Other diners though, like Don Lepato, were much more considerate.

"You can go in there, you can talk as loud as you want without interrupting anybody," he said. "It is quiet in there and the reception is outstanding too."

And with the cell phone stalls themselves getting such a positive reception, you have to wonder whether BlackBerry booths be far behind.

The FCC is considering allowing passengers to talk on cell phones during flights. If that happens, some suggest phone booths on airplanes may not be far behind.