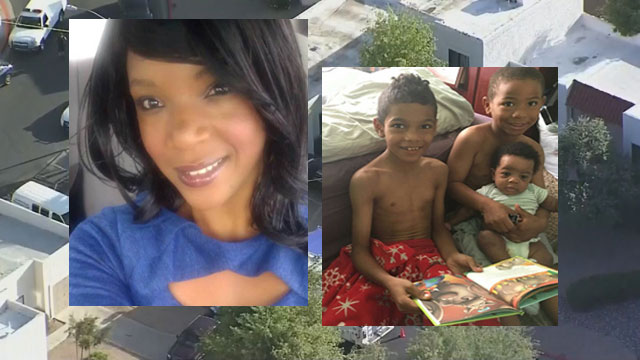 PHOENIX -- Arizona child welfare officials said Friday they had previous contacts with the family of a 2-month-old, 5-year-old and 8-year-old boy found stabbed to death in their Phoenix home.

The primary suspect - the boys' mother - remains hospitalized with self-inflicted stab wounds. Detectives haven't been able to interview her because of her condition, Phoenix Police Sgt. Trent Crump said Friday.

The state Child Safety Department said investigators couldn't locate the family in 2010 to check reports of a boy with a small abrasion on his forehead.

The agency said it also investigated cases in 2011 and 2016 involving marijuana allegations in which it found no legal grounds to take the children into emergency care.

The department said one allegation -- that the mother gave birth to a baby exposed to marijuana -- was substantiated, but the investigator found the children to be safe and referred the mother for services, CBS Phoenix affiliate KPHO-TV reports.

The other allegation -- of marijuana odor coming from the family home -- was not substantiated, the department reports.

The department takes seriously its responsibility to protect children, but its powers are limited, agency Director Greg McKay said.

"We cannot predict the future, and people can at times do awful things," he said in a statement.

The suspect's brother came home from work Wednesday night to find her in the garage. She talked about God and said she found the answer to life. Then she went inside, locking the door behind her.

The brother forced his way in and found the woman had barricaded herself in another room. She eventually emerged with stab wounds across her abdomen and neck, Crump said.

The woman told her brother she did it because she was pregnant - though police have not confirmed that, Crump said.

Officers who responded didn't immediately find the boys' bodies because the woman said the children were with a caretaker, police said.

After the mother was taken to a hospital, police searched the house and found the boys dead in a closet. They appeared to have been stabbed to death, and "parts of their bodies were dismembered," Crump said Thursday as investigators processed the scene.

The baby was inside a suitcase.

Crump said Friday there will be delays in obtaining the woman's medical records and related information because of a need to get subpoenas.