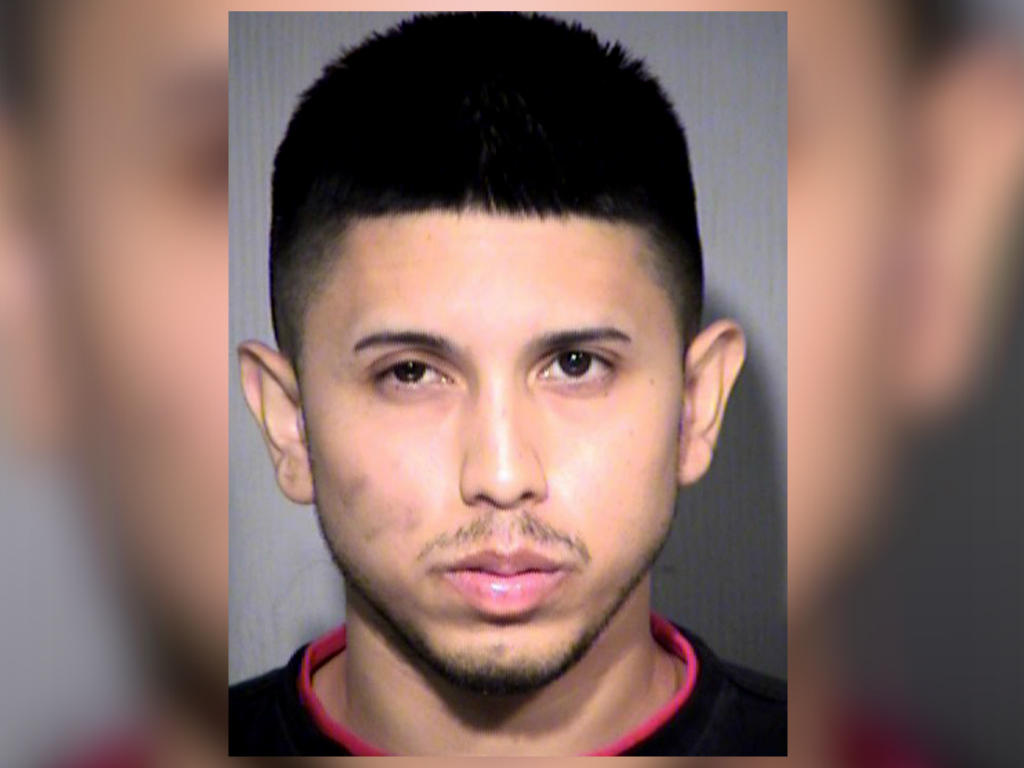 PHOENIX -- A man was arrested Monday in a string of serial killings that terrified a Phoenix neighborhood last year, a huge break in a case that involved nine deaths and a dozen separate shootings.

Most of the killings by a gunman dubbed the Serial Street Shooter took place in a predominantly Latino neighborhood between August 2015 and July 2016.

The investigation into the serial killings had focused what authorities said were seven fatal shootings. But police on Monday said they had tied Saucedo to nine killings in all -- eight random victims and one man that he knew.

Saucedo was booked on 26 felony counts, including homicide, assault and drive-by shooting. Police say tips from the community resulted in his arrest.

"Our hearts go out to the surviving families. Today we are closer to providing them the justice they deserve," Williams said.

The shooter stalked victims after dark, police have said, selecting people who were either outside of their homes or sitting in cars before opening fire with a handgun.

The Phoenix police chief and mayor appeared alongside other top officials including the county's top prosecutor to announce the break in a case that had appeared largely stalled in recent months as leads and tips dried up.

"This case plagued our community for more than a year ... and left behind a trail of victims that included mothers, sons, brothers, sisters and families still mourning the loss of their loved ones," William said.

Saucedo was arrested last month in connection with the August 2015 fatal shooting of a man who had a relationship with his mother, 61-year-old Raul Romero. Authorities investigated him more closely and connected him to the serial killings.

Police say that after Romero's killing, Saucedo struck again about four months later in killing 22-year-old Jesse Olivas, who was gunned down on New Year's Day 2016 while standing in front of a home.

The suspect then went on a killing spree from March of last year through July, police said.

In the end, nine people were killed in 12 separate shootings. All of the killings were random except for the first one, Williams said.

"We hope that our community will rest a little easier and that our officers will get a little more sleep knowing that the wheels of justice are finally in motion," Williams said.

Police said the killings were unrelated to a series of 2015 freeway shootings in Phoenix that terrified drivers.

But in a strange quirk, the Department of Public Safety said Saucedo's gun from the killing of his mother's friend had been test-fired as part of the freeway shooting probe.

The weapon was the same type used in the freeway shootings -- a High-Point 9mm pistol -- but authorities say Saucedo had nothing to do with that case.

The department said it did not conduct ballistics tests on the gun and returned it to the pawn shop a few days later because investigators identified who they believed was the suspect in the freeway shootings case.

His case was ultimately thrown out however, but investigators still believe he's the culprit.

Police did not provide a motivation or details about why they believe Saucedo opened fire. The Associated Press was unable to reach Saucedo's public defender on Monday.

Marina Smith, the partner of 21-year-old Diego Verdugo-Sanchez, who was gunned down on April 1, 2016, said she welcomed news of the arrest but was still struggling with his loss.

Smith was seven months pregnant with the couple's child when Verdugo-Sanchez was fatally shot in front of a home.

Smith said she had grown frustrated over the past year as detectives kept her in the dark about the investigation.

"The fact of them finding somebody, at least it was some type of news," Smith said.

Police say Saucedo shot at two teenage boys on March 17, 2016, striking one of them in the arm. The suspect struck again the next day but didn't kill anyone.

The next shooting didn't happen until April 1, 2016, when Verdugo-Sanchez was fatally shot.

In the most recent attack on July 11, 2016, a 21-year-old man and his 4-year-old nephew escaped injury after the gunman shot at a vehicle they were sitting in.

Rosa Pastrana, the head of a block watch group in the Maryvale neighborhood hardest hit by the killings, was relieved after hearing news of the arrest.

"I'm happy my kids are going to be able to walk outside and I won't have to fear that they're going to get shot," Pastrana said.

Pastrana said she spearheaded a neighborhood effort to encourage residents to talk to police.

Some residents were apathetic at first but many got involved as the shootings continued, she said.