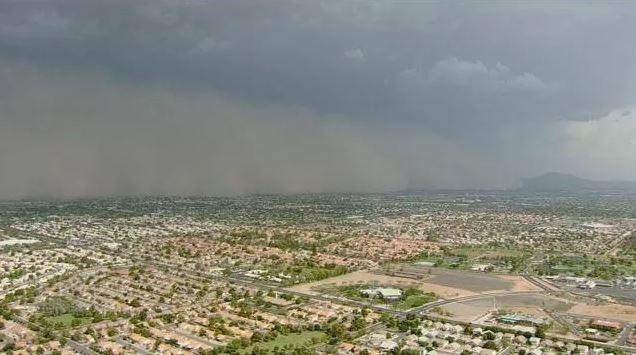 Salt River Project reported an estimated 30,000 of its customers were without electricity in Apache Junction and Mesa due to the storm, the second monsoon in two days to hit the Phoenix area.

The CBS News affiliate in Phoenix said there was significant property damage reported at a mobile home park in Mesa.

"Others have lost parts of their mobile, some of them have lost parts of the home so I'm just thankful it wasn't any worse than it was," Audrey Burklund, an elderly resident at the Cielo Grande mobile home park, told Arizona Family. "I was concerned. I wasn't scared. At 90 years old, you don't get scared anymore, you're ready to go."

It was unclear when electricity would be restored because of broken power poles, according to SRP spokesman Jeff Lane.

Chief meteorologist for 3TV, Royal Norman, said the storm could wind up being one of the biggest of the season.

"I think this dust storm is going to push through the entire Valley," Norman said, explaining that the storm cells formed "right on our doorstep."

High winds blew off part of the roof of a Phoenix apartment onto the tops of some cars parked outside. One person in a car was treated for minor injuries, city firefighters said, and 20 residents were displaced.

In Mesa, firefighters said a tree fell onto a home and briefly trapped a 70-year-old man who was taken to a hospital in stable condition.

The storm moved from east to west through the region, dropping nearly an inch of rain in some spots and hail on some highways.

There were no immediate reports of any traffic accidents, however.

A monsoon late Sunday knocked out power lines in Buckeye, affecting about 21,000 residents who get their electricity from Arizona Public Service.

According to the National Weather Service, 50 miles per hour winds created dust storms throughout the Buckeye area about 36 west of Phoenix.

Power was restored to almost all of the affected Buckeye residents by Monday afternoon before the second storm hit.

Dust storms are common during Arizona's monsoon season, which runs from mid-June to the end of September.