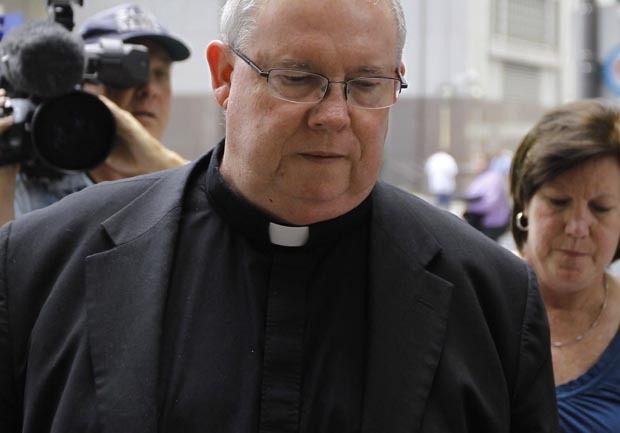 (CBS/AP) PHILADELPHIA - A Roman Catholic church official was convicted Friday of child endangerment but acquitted of conspiracy in a groundbreaking clergy-abuse trial, becoming the first U.S. church official convicted of a crime for mishandling abuse claims.

Monsignor William Lynn helped the archdiocese keep predators in ministry, and the public in the dark, by telling parishes their priests were being removed for health reasons and then sending the men to unsuspecting churches, prosecutors said.

The jury could not agree on a verdict for Lynn's co-defendant, the Rev. James Brennan, who was accused of sexually abusing a 14-year-old boy.

Lynn has been on leave from the church since his arrest last year. He served as secretary for clergy from 1992 to 2004, mostly under Cardinal Anthony Bevilacqua.

No matter the verdict, the trial exposed how deeply involved the late cardinal was in dealing with accused priests. Rarely an hour of testimony went by without Bevilacqua's name being invoked.

Bevilacqua had the final say on what to do with priests accused of abuse, transferred many of them to new parishes and dressed down anyone who complained, according to testimony. He also ordered the shredding of a 1994 list that warned him that the archdiocese had three diagnosed pedophiles, a dozen confirmed predators and at least 20 more possible abusers in its midst. Prosecutors learned this year that a copy had been stashed in a safe.

Lynn didn't react when the verdict was read and remained sitting in his chair, his head lowered, even when the judge took a brief recess to thank the jury. He also didn't acknowledge the dozen or so family members, some of whom were weeping, sitting behind him in the gallery.

The judge ordered that Lynn's bail be revoked and he was led to jail. The judge said she would at some point entertain a motion for house arrest.

With the verdict, jurors concluded that prosecutors failed to show that Lynn was part of a conspiracy to move predator priests around.

The jury, however, did find that Lynn endangered the victim of defrocked priest Edward Avery, who pleaded guilty before trial to a 1999 sexual assault.

Lynn had deemed Avery "guilty" of an earlier complaint by 1994, and helped steer him into an inpatient treatment program run by the archdiocese. But Lynn knew that Avery later was sent to live in a northeast Philadelphia parish, where the altar boy was assaulted.

Karen Polesir, a spokeswoman for the Survivors Network of those Abused by Priests who was outside the courthouse, said it was a historic trial because it revealed "the abuse and the cover-ups that have been going on in the Philadelphia archdiocese for a long time."

She said her immediate reaction to the verdict was tears.

Defense lawyers say Lynn alone tried to document the complaints, get priests into treatment and alert the cardinal to the growing crisis. Church documents show therapists had called one accused priest a ticking "time bomb" and "powder keg."

During the 10-week trial, more than a dozen adults testified about wrenching abuse they said they suffered at the hands of revered priests.

A former seminarian said he was raped by a priest throughout high school at the priest's mountain house.

A nun testified that she and two female relatives were sexually abused by a priest described by a church official as "one of the sickest people I ever knew."

A troubled young man described being sexually assaulted in the church sacristy in 1999 by Avery after the 10-year-old altar boy served Mass. Avery is serving a 2 1/2- to five-year prison term.

"I can't explain the pain, because I'm still trying to figure it out today, but I have an emptiness where my soul should be," another accuser testified. His mother had sent him to a priest for counseling as an eighth-grader because he'd been raped by a family friend. The priest then followed suit, he said.

Seven men and five women sat on the jury, along with eight alternates. Many have ties to Catholic schools or parishes, but said they could judge the case fairly. There are about 1.5 million Catholics in the five-county archdiocese, and Philadelphia neighborhoods were long identified by their local parishes.

Defense lawyers called the decision to send Lynn to prison overly harsh, given his ties to the community and lack of any prior criminal record. They said they would move for house arrest on Monday. Lynn will spend at least the weekend in a Philadelphia jail.

"He's upset. He's crushed. He's in custody and he didn't want anything else but to help kids," defense lawyer Jeffrey M. Lindy said.

Brennan, Lynn's co-defendant, was accused of sexually abusing a 14-year-old boy in 1996. With the jury unable to agree, the judge declared a mistrial on the attempted rape and child endangerment charges against him.

Lynn's lawyer, Thomas Bergstrom, pledged in opening statements in late March that the monsignor would not run from the sins of the church. However, he said in closing arguments that Lynn should not be held responsible for them.

He suggested his client was a middle manager-turned-scapegoat for the clergy-abuse scandal. Lynn, he said, documented the abuse complaints and did his best to get reluctant superiors to address it.

"And now, now of all things, the commonwealth wants you to convict him for documenting the abuse that occurred in the archdiocese, .... the evil that other men did. They want to hold him responsible for their sins."

Philadelphia prosecutors have been investigating the archdiocese for 10 years, since the national crisis erupted in the Boston archdiocese. Lynn testified several times before a grand jury that sat from about 2002 to 2005.

That panel produced a blistering report that identified 63 suspected child molesters in the archdiocese, but said no one could be charged because of legal time limits.

In a hotly contested ruling in Lynn's case, Common Pleas Judge M. Teresa Sarmina let prosecutors tell jurors about 20 of the accused priests named in the first grand jury report, even though they were never charged, because Lynn worked on their files to some extent.

Prosecutors said they showed a pattern at the archdiocese of lying about why priests were removed, sending them to "company doctors" at church-run therapy centers and failing to warn new parishes where they were later transferred.

"They put so many innocent children in danger," Assistant District Attorney Patrick Blessington said in his closing remarks, noting that it can take years or decades for victims to come forward. "That's what's so scary about this. We have no idea how many victims are out there."

By Bergstrom's count, the commonwealth spent about 36 of 40 trial days on the tangential cases.

An appeal based on the inclusion of that evidence is considered likely.

CBS Philadelphia reports that after the verdict, the Archdiocese of Philadelphia issued a statement which said in part:

"The lessons of the last year have made our Church a more vigilant guardian of our people's safety. The Archdiocese of Philadelphia is on a journey of reform and renewal that requires honesty and hope...

"The Archdiocese of Philadelphia offers a heartfelt apology to all victims of clergy sexual abuse. Now and in the future, the Church will continue to take vigorous steps to ensure safe church environments for all the faithful in Philadelphia."