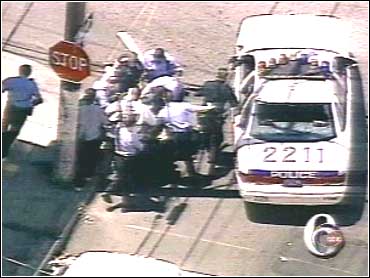 Philadelphia civic leaders worried that their city would get dumped on during next week's Republican National Convention have one less worry: a looming municipal strike that would have included garbage collectors and 911 operators has been averted.

Leaders of the city's blue-collar workers union and Mayor John F. Street announced a tentative agreement on Tuesday, avoiding the possibility of a strike by city workers during the week before the convention.

With 45,000 people expected to descend on the City of Brotherly Love for the convention at the First Union Center, civic leaders would like nothing more than to show the country and the world that Philadelphia's problems are in the past.

"I think it gives us an opportunity to show what the city is like in the year 2000, which is very different from what it was twenty years ago," said Mayor Street.

But then there's that recent video of Philadelphia police kicking and beating a suspected carjacker - a video that The Philadelphia Inquirer called something "that threatens to undermine a decade of progress." The suspect is now in the hospital with a host of injuries and just as many criminal charges.

The Rev. Vernal Simms, an organizer of an anti-police protest last weekend, said, "I think the beating has got more attention because of the Republican convention coming here."