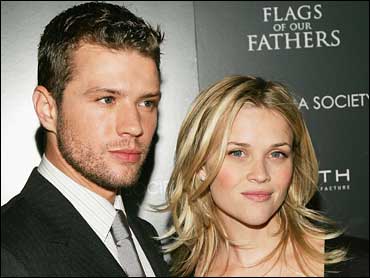 Witherspoon filed for divorce on Nov. 8, citing "irreconcilable differences" as the reason for the split. She asked for physical custody of the couple's two children — 7-year-old Ava and 3-year-old Deacon.

In the Superior Court divorce petition, Witherspoon, 31, asked for visitation for Phillippe, 32, and "exclusive use of the family residence."

In a response filed Tuesday, Phillippe also cited irreconcilable differences but asked for joint legal custody and physical custody of the children as well as visitation granted "to both parties, equally allocated."

The documents filed with the court in November and this week do not list separate or community property, saying the nature of the assets has yet to be determined.

Witherspoon's petition requested that the court not grant any spousal support to Phillippe. There was no request for support in Phillippe's petition.

The couple, who costarred in the 1999 release "Cruel Intentions," married that year.

Last year, Witherspoon won an Academy Award for her role as June Carter Cash in 2005's "Walk the Line." Phillippe costarred in the best-picture Oscar winner, "Crash," and starred in Clint Eastwood's "Flags of Our Fathers."