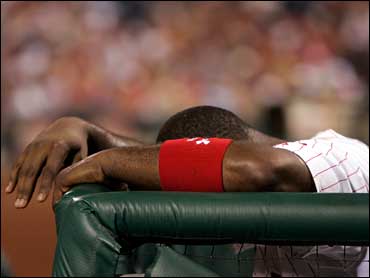 It was the kind of game Phillies fans had seen thousands of times before.

Loss No. 10,000 came Sunday night when Albert Pujols hit two of the St. Louis Cardinals' six homers in a 10-2 rout of Philadelphia.

By the ninth inning, with the outcome inevitable, the boos turned to cheers. Fans in the sellout crowd of 44,872 thumbed their noses at the dubious mark, standing and applauding. One held up a sign that read: "10,000 N Proud" as NL MVP Ryan Howard struck out to end the game.

From Connie Mack Stadium to the Vet and Citizens Bank Park, and at ballparks all over, the Phillies have cemented their place as the losingest team in professional sports. The franchise, born in 1883 as the Philadelphia Quakers and later called the Blue Jays in the mid-1940s, fell to 8,810-10,000.

Next on the losing list: the Braves, with 9,681 defeats. It took them stints in three cities (Boston, Milwaukee and Atlanta) to reach that total. Not even those lovable losers, the Chicago Cubs, come close at 9,425.

And for those counting, it was the 58th time the Phillies have lost by that exact 10-2 score, the Elias Sports Bureau said.

The Phillies avoided the milestone for three games, but the Cardinals — the team that caught them 43 years ago for the NL pennant in one of the biggest collapses in baseball history — beat Philadelphia one more time.

Earlier, a banner hung from the upper deck that read "10,000 is not in the Cards." Turns out, it was on this night.

So the franchise that won only one World Series championship (1980) in 125 years, has 14 seasons of 100-plus losses, and once lost 23 straight games, now has the ugliest number of them all in a city way too familiar with losing.

After combining for 23 runs and 37 hits in the first two games of the series, the Phillies were held in check by Adam Wainwright (8-7). He threw seven shutout innings against the highest-scoring team in the National League.

Philadelphia, with a 46-45 record this year, fell five games behind the NL East-leading New York Mets.

These Phillies had long grown tired of answering questions about 10,000, and most fans seemed rather detached from the number. After all, what's one more loss from a team responsible for countless more than 10,000 broken hearts?

"It's just another one as far as I'm concerned," said 81-year-old fan Ty Ayars, of Swedesboro, N.J. "They need pitching and until they get good pitching, they're not going to win a World Series any time soon."

Fans don't have to be old enough to remember the 1950 "Whiz Kids" to have suffered. Take fan Andrew Haines, 25, of Pitman, N.J., who still can't shake the image of Phillies closer Mitch Williams allowing the game-ending homer to Joe Carter that won the 1993 World Series for the Toronto Blue Jays.

"It's hard to be a Phillies fan," said Haines, wearing a Phillies cap. "They're the butt of a lot of baseball jokes, and having 10,000 losses isn't helping any."

The Phillies blew their chance to push back No. 10,000 until their seven-game West Coast road trip when even the die-hards would have trouble staying awake to watch it.

The Cardinals scored twice in the first inning against Adam Eaton (8-6). Scott Rolen, the former fan favorite turned No. 1 target of the vicious boo birds, had an RBI in the third for St. Louis.

Pujols hit a two-run shot in the fifth that was followed by Chris Duncan's 17th of the year for a 6-0 lead. Pujols, Juan Encarnacion and Adam Kennedy each homered in the seventh to make it 9-0.

Ryan Ludwick hit a solo shot in the eighth for a 10-0 lead.

Philadelphia broke up the shutout in the ninth when Michael Bourn hit his first major league homer and Chase Utley added an RBI double.

Every true fan knows of the infamous 1964 collapse when the Phillies held a 6½-game lead with 12 to play, only to blow the NL title by losing 10 straight. The Cardinals won the pennant by one game.

Never known as lovable losers, cursed, or even affectionately as bums, the Phillies had a big head start in earning this pitiable total: They played their first game on May 1, 1883, against the Providence Grays. Of course, the Quakers lost 4-3 and started 0-8. They went on to lose 81 of 98 games in their inaugural season.

It hasn't been all bad for the Phillies. They haven't lost 100 games since 1961, and they won the NL East three straight years from 1976-78. Philadelphia lost the World Series in 1983 and 1993, though it hasn't returned to the playoffs since Carter's homer.

Greg Luzinski (1970-1980) hit 223 homers for the Phillies and was the starting left fielder for the 1980 World Series team. He now runs the "Bull's BBQ" stand at Citizens Bank Park and said the Phillies would win at least one more championship in the next 125 years.

"They're not that far away now," he said. "They've been around a long time, so you're going to accumulate the losses. I know people are disappointed they won only one world championship, but a catch here, a hit here, a pitch there, we might have had more."