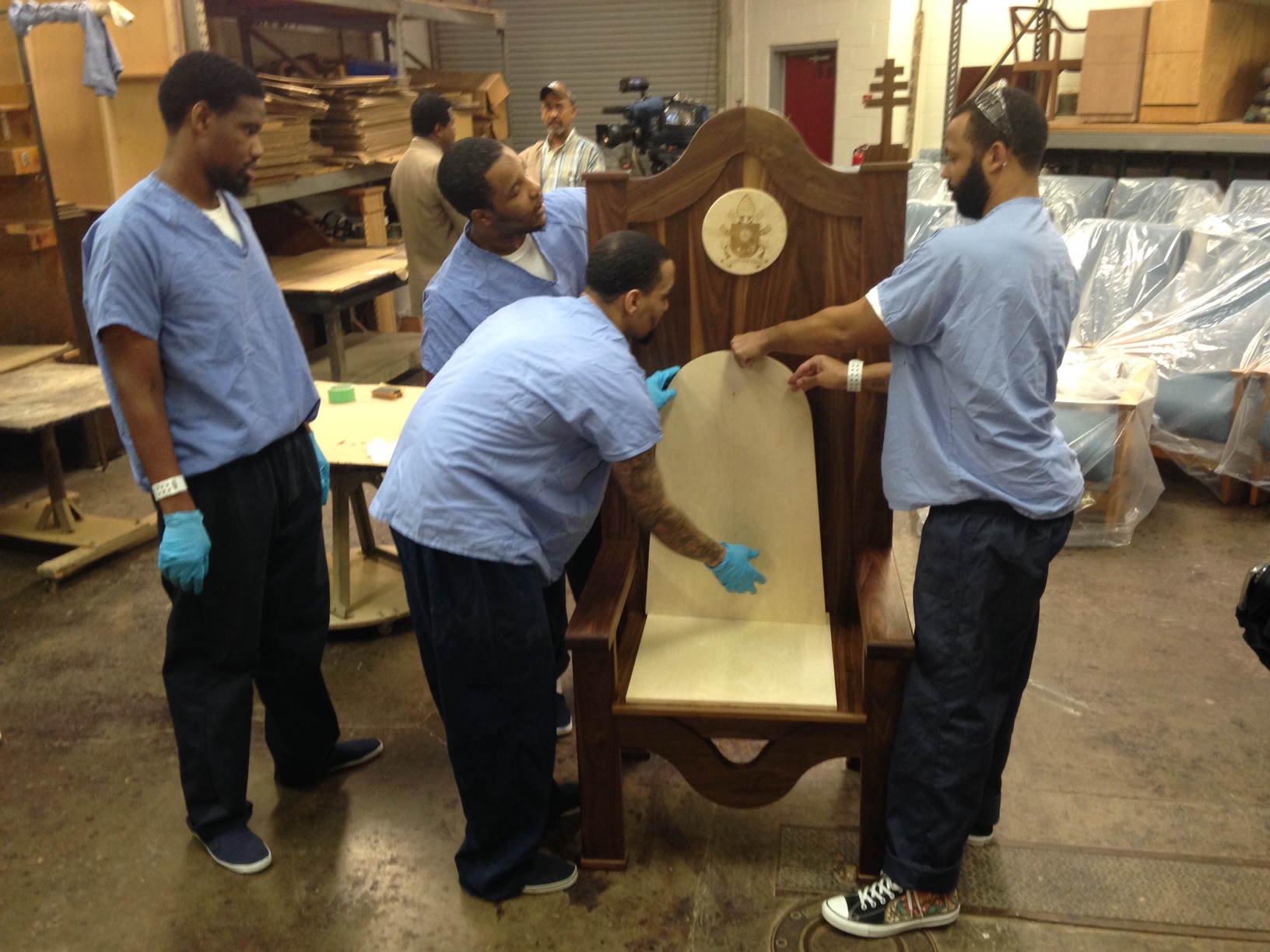 PHILADELPHIA -- Pope Francis will have a special place to sit when he meets with Philadelphia prisoners next month.

Inmates in the city's correctional system have been working for the past couple of weeks on a stately chair they hand-carved out of walnut. On Monday, another group of prisoners sanded, oiled and refinished the piece, which stands nearly 6 feet tall.

Rameen Perrin, who said he's spent 13 months behind bars on drug charges, said it meant a lot to be chosen for the papal project. Prisoners were picked based on work ethic, skill and reliability.

"It made me honored because I'm one of the ones that work hard, and they noticed," said Perrin, 21.

The chair was made and refinished at the Philadelphia Industrial Correctional Center, one of six jails in the municipal system.

Next, it will be upholstered at Curran-Fromhold Correctional Facility, where Francis plans to meet Sept. 27 with about 100 prisoners and their relatives during a two-day trip to the city. Five families of select Catholic inmates will also be in the audience at Francis' request, reports CBS Philly.

Francis has made prison ministry a focus of his pontificate. He meets frequently with inmates and has washed prisoners' feet during pre-Easter rituals. In July, he visited a notorious Bolivian prison where he urged inmates to help one another and encouraged staff to rehabilitate prisoners, not humiliate them.

Anthony Newman, assistant director of a vocational program in the Philadelphia prisons, designed the gift for Francis and has been overseeing its construction. He hopes to see the pontiff enjoy the finished product but isn't sure how the chair will be presented to him.

"The fact that I got the privilege to do the chair is good enough if I never see him sit in the chair," Newman said. "So I'm happy."

The prisoners who get to meet with the pope have not yet been chosen but will include some who made the chair, officials said.

Prisons Commissioner Louis Giorla said previously that good behavior would be one factor in the selection process. Many faiths will be represented, officials said.

Giorla has said he's especially glad the pope asked to meet with inmates' families because "we feel that community ties, family reunification is one of our goals."

In January, inmates also made a special chair for Philadelphia Archbishop Charles Chaput when he celebrated Mass at the facility.

Francis is scheduled to visit Philadelphia on Sept. 26-27 to close out the World Meeting of Families, a triennial Catholic conference focused on strengthening family bonds.

In addition to the prison visit, he plans to give a speech at Independence Hall, attend an outdoor family festival and lead a public Mass for more than 1 million pilgrims.