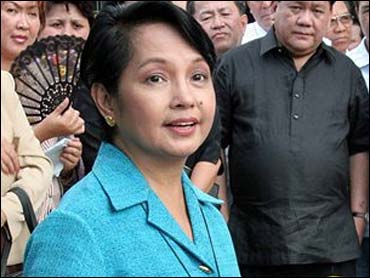 Undercut but unbowed, President Gloria Macapagal Arroyo defiantly resisted a growing clamor for her resignation Friday, telling allies-turned-critics that they were undermining democratic principles by trying to force her out.

As the day unfolded, Arroyo became increasingly isolated, as a third of her Cabinet abandoned her and told her she should quit over an election scandal that she claims the opposition blew out of proportion to unfairly demonize her.

A party in her ruling coalition jumped on the bandwagon, as did business and civil groups who had supported her. Even former President Corazon Aquino, a close ally who took office the same way as Arroyo, through a peaceful "people power" revolt, said it was time to go for the sake of the nation.

"I say that their actions cause deep and grievous harm to the nation because they undermine our democratic principles and the very foundation of our constitution," Arroyo said in a radio address. "Once again, we're ... perpetrating a system that is broken and will remain broken until fundamental reforms are put in place."

The 58-year-old U.S.-trained economist said she was moving on by naming a new Cabinet. She repeated her offer to undergo an impeachment process, telling her opponents they should follow proper procedure and take their case to Congress, where her administration holds majorities in both houses.

"The Philippines has fallen into a dangerous pattern, where the answer to every crisis is to subvert due process rather than work within the system," Arroyo said. "This must stop. I was duly elected to uphold the constitution and ensure that the institutions of the nation were strengthened, not weakened."

Despite her effort to present a business-as-usual approach, prospects appeared to be fading for anything other than a peaceful handover of power to Vice President Noli de Castro, who leftist groups said must show that he's not tainted, too.

Her Cabinet defectors told a news conference that Arroyo has been crippled by allegations that she rigged last year's presidential race, was making decisions guided by her political survival and has lost the ability to lead.

The Liberal Party, a key part of Arroyo's coalition, said it would support an impeachment process if she won't yield power.

The remaining two-thirds of Arroyo's Cabinet held a news conference supporting her. Still, even those allies were essentially shadows, handing in the courtesy resignations she sought Thursday night to give her a free hand in trying to navigate her way out of her biggest crisis.

For the time being, the influential Roman Catholic Church and the powerful military — both players in the 1986 "people power" revolt that ousted Ferdinand Marcos and the 2001 repeat that forced out Arroyo's predecessor, Joseph Estrada — were on the sidelines.

"Commanders should act swiftly against any behavior that challenges or breaks away from the chain of command," military chief of staff Gen. Efren Abu said. "This is not the time for weakness."

The capital's police force went on full alert and additional contingents were securing the presidential palace.

Keeping up almost daily protests against Arroyo, about 5,000 people demonstrated in Manila's financial district, but once again the turnout was a fraction of the size of the two "people power" revolts.

Joseph Mussomeli, the U.S. Embassy's deputy chief of mission, said Washington firmly opposes any forced change of power — "anything that will weaken the institutions that we genuinely believe are the true safeguards for your own liberty."

The backbone of Arroyo's economic team — her economic, trade and budget secretaries — were among the eight government ministers and two other members of her Cabinet who abandoned her.