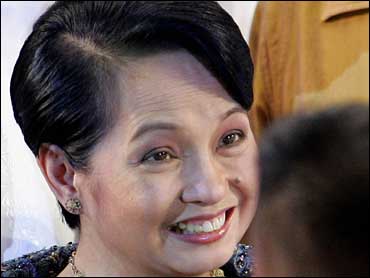 Opposition lawmakers in the Philippine parliament filed impeachment proceedings Monday against President Gloria Arroyo, accusing her of vote-rigging and other allegations.

Arroyo made no direct reference to the 2-month-old scandal during her annual state of the nation address hours later, but urged Congress to undertake quick constitutional changes toward a more stable form of government and hopefully ease the political divisions hampering the Philippines.

Changing to a parliamentary system — where lawmakers can vote out a sitting government — theoretically could cut Arroyo's term short since a successful referendum on the changes likely would be followed by fresh elections.

But it would give her a somewhat graceful way out of the mess that has paralyzed her government with nearly five years left in office.

The impeachment complaint claims Arroyo "cheated and lied" to obtain and hold power. "By so flouting justice and the rule of law, she has committed an unforgivable outrage against the Filipino people," the complaint says. Her aides have moved to block it on a legal technicality.

Arroyo has denied manipulating the May 2004 ballot by discussing vote counting with an election official before she was declared the winner. She said she's ready to face an impeachment trial to clear her name and has announced a "truth commission" also will probe the allegations against her.

Left-wing lawmakers have warned of a "people power" revolt — the type of street demonstrations that ousted late dictator Ferdinand Marcos in 1986 and President Joseph Estrada in 2001 — if pro-Arroyo lawmakers, who have a strong majority in the House of Representatives, kill or weaken the complaint.

Referring indirectly to the "people power" revolts and a constant rash of coup attempts and takeover rumors, Arroyo said in her 20-minute speech that her nation has become too polarized to make the changes it needs to meet the challenges of the 21st century.

"The system clearly needs fundamental change — and the sooner, the better," Arroyo said. "Ours is a country divided. One is a Philippines whose economy ... is now poised for takeoff. The other ... has become a hindrance to progress."

Police and the military were on alert as about 25,000 opposition supporters gathered outside the House building in suburban Quezon City. About 5,000 supporters of the president rallied for her nearby.