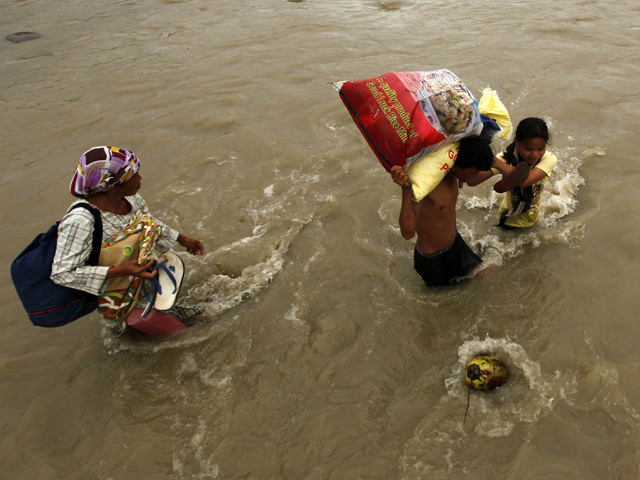 MANILA, Philippines - The death toll from flash floods that swept away entire villages in the southern Philippines climbed to nearly 1,500 on Tuesday, as authorities widened their search for bodies.

The Office of Civil Defense's latest tally listed 891 dead in Cagayan de Oro and an additional 451 in nearby Iligan city. The rest came from several other provinces. Most of the dead are unidentified.

"The search will continue as long as we are recovering bodies," said Civil Defense head Benito Ramos.

He said that decomposing remains were retrieved floating in the sea as far as 60 miles (100 kilometers) from the two cities where a Dec. 16 tropical storm unleashed more than a month's worth of rainfall in 12 hours, sending walls of water gushing into homes.

One of the dead was a headless girl who appeared to have been hit by logs that were carried by flash floods, Ramos said. She was among 13 bodies retrieved by a team of navy sailors.

Navy and coast guard divers were initially sent to find more bodies believed to be pinned down by logs scattered in the sea and along riverbanks, but Ramos said the operation had to be called off because waters were too murky. "It's useless to dive when you can see nothing," he said.

It was not clear how many more are missing.

More than 60,000 homeless from hundreds of flood-ravaged villages spent a miserable Christmas in jam-packed schools and gymnasiums, while the United Nations launched an urgent appeal for $28 million to help the displaced — more than half the population of Cagayan de Oro and Iligan, which are in the southern Philippines' Mindanao region.

More rains Tuesday prompted evacuations of nearly 2,000 people on the opposite side of Mindanao Island, where a child was reported missing in floods in Surigao city, the civil defense reported.

Communist guerrillas in the south, meanwhile, threatened to punish multinational companies they blame for environmental destruction.

Rebel spokesman Jorge Madlos told The Associated Press by telephone that they sought funds for victims from huge pineapple and banana plantations and other companies.

"Some were lukewarm to our call," Madlos said. "That'll be a factor when we decide which ones to punish first for this destruction."

Another factor in the staggering death toll was illegal settlements along Cagayan rivers. Thousands of people lived in shanties on the banks and islands directly along the water's path.