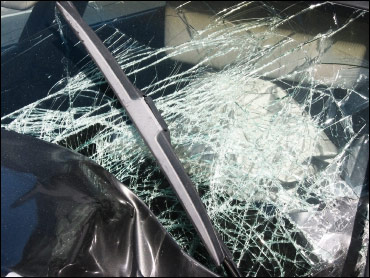 A bus rented by Iranian medical students plunged into a ravine off a mountain road in the central Philippines, killing 20 people and injuring about 26 others, officials said Monday.

Nine of an estimated 55 passengers were unaccounted for still, but the military was double-checking because it was unclear exactly how many people were on board, Feria said.

Villagers and police pulled bodies from the mangled wreckage at the rocky bottom of the ravine, while a backhoe sent by a nearby Japanese shipbuilding company attempted to lift the bus up, Feria said.

Cables were attached but the bus was too heavy and there was a danger the backhoe might be pulled down, he added.

The bus had an ominous plate number: DWZ-666, the "Number of the Beast" in the Bible's Book of Revelation.

Many victims were medical students in Cebu, a bustling commercial and tourism center 350 miles southeast of Manila. They were identified by relatives and through their IDs, Digal said.

Feria said it was not clear if the Iranians were involved in a medical mission or went for an outing at one of several resorts in and around Cebu.

Poorly maintained vehicles and roads, along with inadequate safety signs, railings, training and weak traffic law enforcement, are blamed for many deadly accidents in the Philippines.