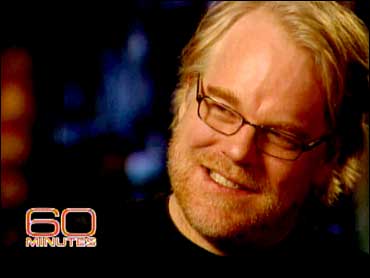 With the Academy Awards just a couple of weeks away, and this year's list of nominees dominated by small independent films, it is fitting that Philip Seymour Hoffman is considered by many to be the front runner for best actor.

He is not really a movie star, yet, and the name may not even ring a bell, but if you like watching movies, you will recognize his face and recall some unforgettable performances.

He is a character actor rarely called up to carry an entire film on his shoulders, but he has carried "Capote" to five nominations, including best picture. He has been considered one of the best actors in Hollywood and on Broadway for a half a dozen years, equally adept at silliness or Shakespeare.

"If you can go to the theatre, and you're in a room with a bunch of other people. And what's happening in front of you is not happening. But you actually believe it is. If I can do that, I've done my job," says Hoffman. "And that's the thing — that is a drug. That's a drug. That's something you get addicted to."

Philip Seymour Hoffman would rather you remember the characters he's played than remember him. He insisted on meeting Kroft and the 60 Minutes crew at 8 a.m. in the heart of New York's Greenwich Village, which has been the center of his world for the past 20 years. He went to drama school at New York University and still lives somewhere in the neighborhood with his girlfriend and their 3-year-old son

Asked why he wanted to do the interview at 8 a.m., Hoffman said, "I thought it would be easier to talk and stuff and there wouldn't be as many people around."

He came dressed as though he may have slept in the park or wandered out of a homeless shelter, yet he still got stopped by an admiring fan.

"You deserve the Oscar, Mr. Hoffman," the female fan told him.

The familiarity comes from being in almost 40 films in just 14 years. Working with major stars and A-list directors, he's taken small supporting roles and transformed them into memorable characters.

Some of his roles included the trust fund playboy in the "Talented Mr. Ripley," the pernicious preppy in "Scent of a Woman," and the gay-curious sound man in "Boogie Nights."

Not to mention various turns as the obnoxious overweight friend, in "Along Came Polly," and a pre-op transsexual in "Flawless."

All of which beg the question about the scruffy wardrobe.

"Is this the real Phil Hoffman? Or are you now preparing for some other role?" Kroft asks.

"No, this is me," says Hoffman, laughing.

He is totally without vanity, unless the role calls for it, and despite his success at age 38, he is still very much the struggling artist, consumed with the craft of being an actor, grateful for the recognition, but suspicious of fame and celebrity and how it might change him and what he does.

"I think part of being an actor is staying private. I do think it's (an) important part of doing my job — is that they believe I'm someone else," Hoffman explains. "You know, that's part of my job. And if they start watching me and thinking about the fact that I got a divorce or something in my real life. Or these things, I don't think I'm doing my job."

Asked if he wants to be a mystery, Hoffman says, "Well you just want to — you don't want people to know everything about your personal life, or they're gonna project that also on the work you do.

"Like my friends, who I've grown up with, and know me very well, I know they watch my films different than anyone else. I know they come up to me and like, 'Oh, that thing you did, that's just like the thing you do.' You know they'll say that," Hoffman says, laughing. "And I'll be like, 'Oh.' You know, 'cause you want to find a way even to get them to think you're someone else. And when you get that person that knows you that well, to think you're actually someone else, and lose themselves, then you've really done your job."

It was a challenge he faced every day in his portrayal of Truman Capote, who for 20 years was not only America's most famous writer but one of its most recognizable celebrities. The project was developed by two of Hoffman's oldest friends, Bennett Miller, the film's director, and screenwriter Dan Futterman. The three have known each other since they were 16.

Miller says they all worried the movie could end their friendship, and Hoffman had other concerns.

"I knew this was gonna be something — the risk quotient was high," says Hoffman.

Why was it high risk?

"Just the possibility of humiliation," he says. "Yeah, failing was high. Yeah, it was huge. People knew who he was. It was — he's an iconic figure. The fear, the nightmare of just being embarrassingly bad in the role was very real."

The film follows Capote during the six-year period in which he reported and wrote his groundbreaking masterpiece "In Cold Blood," a work of non-fiction told in the form of a page turning novel. It gave him the fame he so desperately craved and that ultimately ruined his life.

For Hoffman, the line between parody and perfection was razor thin, and he spent hours at Bennett Miller's apartment studying old documentaries of Capote.

Most of the footage they screened was from the 1960s, before either of them was born. And when Capote was at the height of his powers, he was a brilliant, glib raconteur who was one of the few openly gay personalities in the country.

"He worked as much on promoting himself or putting himself out there as he did on his writing, I believe," says Hoffman.

Looking at old footage of Capote, Hoffman says, "You can see he's full of nervous ticks. If you really are watching closely you can see that his eyebrows are twitching, a lot of movement. His forehead. There's something about him that I could see was agitated."

"Researching this work has changed my life, it's altered my point of view about almost everything," says Hoffman. "What is it? What is his personality? What makes him tick? I knew that deep down inside I had to understand it for myself in some personal way."

Hoffman grew up in a middle class household near Rochester, N.Y. In high school he was a clean cut, competitive jock who excelled in baseball and wrestling until a neck injury cut short his athletic career and hormones led him to acting.

"And this woman that I was — a mad crush on — woman, girl, she was in high school — walked by the other way. And, 'Where you going?' And she goes, 'I'm going to audition for a play.' You know and I kept walking — 'I think I'll go too.' And I turned around. And I followed her in," Hoffman recalls. "And I auditioned for the play. And I got to be with her everyday. You know what I mean? It was like you're just a teenager. And you have a crush, you know. And then all of a sudden it's not about the crush. All of a sudden you realize you like doing theater. And it's, you like being an actor. You like hanging out with these people."

Over time, he applied the same competitive drive he had with wrestling, to grappling with roles on the stage and screen, steadily building an impressive resume, with a stubborn, single-minded zeal for perfection that he doesn't seem entirely comfortable with.

"If I don't think I'm doing well, I'm unpleasant. That's my neurosis, you know what I mean?" he says laughing. "If I don't feel like I'm doing the job well, and I don't know how to get there, or I'm too scared, or whatever, I'm not a happy guy and I'm not pleasant. I'm not pleasant to be around."

The depth of his commitment and his talent is apparent in one of the final scenes of "Capote." After six years of cajoling, befriending and seducing two killers into telling him the story that will make him famous, as he says his good-byes they are heading off to the gallows.

It took Hoffman nine months of his life to get the performance just right, and when the shooting was over, he was tapped out, and done being Truman Capote.

"I remember I immediately started talking like myself, like that," he says, snapping his finger. "And, I thought to myself, 'I'm never — I'm never gonna do that again. I'm not gonna act like him anymore,' " says Hoffman.

"Because I was free, first off. So the minute you're able to walk away from that and separate, just you do. I do," he explained.

"So, you can't even do it like one more time?" Kroft asked.

"Yeah," Hoffman said, laughing. "That might be — you know, if I start drinking again, you might be able to get me to do it."

That last comment was a small slip for someone who guards his privacy as closely as Hoffman does, but it says something about his past and his discipline.

Hoffman says he doesn't drink and went into rehab at a fairly early age. "I got sober when I was 22 years old," he says.

Asked if it was drugs, alcohol or both, Hoffman says, "It was all that stuff. Yeah. It was anything I could get my hands on. Yeah. Yeah. I liked it all."

Why did he decide to stop?

He said if he hadn't stopped it would have killed him and there were things he wanted to do. Since then, he seems to have accomplished a lot of them. After years of acting with his name below the title, his career and his life are about to change.

He has just finished shooting "Mission: Impossible: 3," as the villain opposite Tom Cruise, and with the awards season in full swing he has been spending a lot more time in Hollywood.

"Yeah, there's a lot of dreaming that goes on out here … there are a lot of people that come to this town, you know, to see themselves on a billboard," he said, laughing. "You know, to see their name in lights or whatever, yeah. That dream, you know?"

He is quick to share credit for his work and wanted 60 Minutes to be sure to include his friends and collaborators Dan Futterman and Bennett Miller in this story, so we invited them over to the hotel for a few hands of poker, along with Hoffman's older brother, Gordy, who is also a film director.

Asked what he thought when he first met Phil, Bennett Miller says, "Before I liked Phil, I noticed that everybody else liked him. I can't think of anybody ever saying a bad word about Phil.

"I thought you said he was a pain in the ass," Kroft said.

"But I liked him," Miller said, laughing.

"This is such a bad idea," Hoffman interjected.

The kibitzing was good natured. After all, Futterman, Miller and Hoffman are already big winners, each has his own Oscar nomination for "Capote." They all say it doesn't matter if they win or not, but it was hard to tell if they are bluffing. One of them was concentrating on the poker game more than the others.

"I'm gonna put in a dollar for you, Steve, because I know you're gonna bet because I saw what you have," Hoffman said.

So when you are making your pick for best actor in the office Oscar pool, you might think twice before betting against Philip Seymour Hoffman.

"That's a low pair, and that's a straight," Hoffman said, revealing his cards.

"The whole time he knew, though, he knew he had you all the time," Gordy Hoffman said.