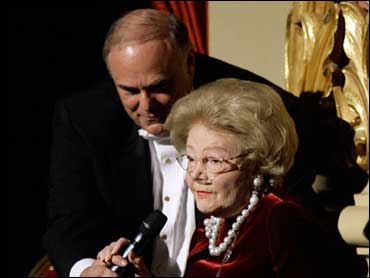 Leonore Annenberg, who as the widow of billionaire publisher Walter Annenberg continued his tradition of philanthropy and patronage of the arts, died Thursday. She was 91.

Annenberg was chairwoman and president of the Annenberg Foundation, which is based in the Philadelphia suburb of Radnor and has a mission "to advance the public well-being through improved communication." She had led the institution since her husband's death in October 2002.

Annenberg was a trustee of the Philadelphia Museum of Art and a member of the acquisitions committee of the Metropolitan Museum of Art in New York. She also served on the Trustee's Council of The National Gallery of Art in Washington, D.C.

Longtime friend Vartan Gregorian, president of the Carnegie Corp. of New York, described Annenberg as "a very classy person with a deep sense of civic commitment and an unparalleled social conscience."

"It is unlikely we will ever know the full extent of the Annenbergs' philanthropy because they did not seek publicity for their gifts and gave many anonymously," Gregorian wrote in a statement Thursday.

The Annenberg Foundation, which also has offices in Los Angeles, has given more than 8,000 grants to nonprofit groups totaling nearly $4.2 billion since its creation in 1989, Jamieson said.

Walter Annenberg was ambassador to Britain under President Richard Nixon. Leonore Annenberg, known to friends as Lee, brought in her own decorator to oversee a million-dollar refurbishment of the U.S. ambassador's residence in London.

A decade later, she was named U.S. chief of protocol, a position that carries the rank of ambassador, during President Ronald Reagan's first term.

In the job, she oversaw visits from foreign leaders and helped arrange Reagan's state visits abroad. She told The New York Times it was "the first paying job I ever had."

"Lee and Walter Annenberg were unparalleled in their philanthropic giving that spanned everything from politics to the arts," Reagan said in a statement. "They left an indelible print on education in the United States and there are millions of young people that have or will benefit from their extraordinary generosity."

Annenberg was a trustee emeritus at Penn, where she and her husband founded the Annenberg School for Communication in 1958. In 1993, the couple gave Penn its largest gift ever - $120 million - to endow the school and create the Annenberg Public Policy Center.

Penn President Amy Gutmann said in an interview Thursday that the Annenbergs' generosity was "all about citizenship, democracy and this country, which they loved."

She described Leonore Annenberg as a woman who had "the utmost decorum," yet was also down-to-earth.

"She always had a project, if not a dozen projects, and she had not an idle second in her life," Gutmann said. "And yet she always had time for people and her friends."

The Annenbergs also established a sister School for Communication at the University of Southern California in Los Angeles.

The Annenbergs maintained a home at their Sunnylands estate in Rancho Mirage but also used the property to host officials, dignitaries and programs.

With Leonore Annenberg's death, it will be available for high-level retreats and open to public tours, Jamieson said Thursday. Sunnylands houses a wide-ranging art collection by artists including Rodin and Picasso.

Walter Annenberg's father started the family publishing empire, eventually acquiring The Philadelphia Inquirer. His son greatly expanded the businesses, adding the Philadelphia Daily News and branching out into magazines, including Seventeen and the hugely successful TV Guide. He also added radio and TV stations and amassed a multimillion-dollar art collection.

He sold off his properties in the 1970s and '80s, bringing huge sums, including a multibillion-dollar deal with Rupert Murdoch.

Walter Annenberg had a son and daughter with his first wife, Veronica, whom he divorced in 1950. His second wife, the former Leonore Cohn Rosenstiel, whom he married in 1951, had two daughters from two previous marriages.

Leonore Annenberg was born in New York City on Feb. 20, 1918, and later graduated from Stanford University.

Survivors include a sister, two daughters, one stepdaughter, seven grandchildren and seven great-grandchildren.