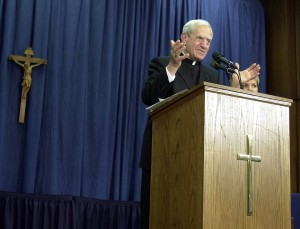 (CBS) PHILADELPHIA - The Philadelphia Archdiocese confirms that Cardinal Anthony Bevilacqua, retired archbishop of Philadelphia, has died, with sex abuse trials looming for members of his clergy.

CBS Philly reports that toward the end of Bevilacqua's tour of duty, a Philadelphia grand jury cited him and his predecessor for allowing dozens of predator priests to continue on the job.

Upon his retirement and the fallout from the grand jury report, Cardinal Bevilacqua went into seclusion at the seminary and was rarely seen in public.

In recent months, however, he was compelled to testify on video in proceedings surrounding his former secretary of the clergy, and other priests accused of abuse. Earlier this week, a judge ruled Bevilacqua was still competent to testify in person at their upcoming trials

Defense lawyers argued that failing memory as a result of dementia an unreliable witness. The Cardinal also suffered from cancer. He died in his sleep Tuesday night in his residence in Lower Merion. He was 88.

Charles Peruto Jr., the former counsel for one of the accused priests and a longtime defense attorney, says Bevilacqua's death changes nothing.

"It has absolutely no legal significance since the judge already ruled that his testimony is admissible at trial, as he was subject to direct and cross examination previously," he said.