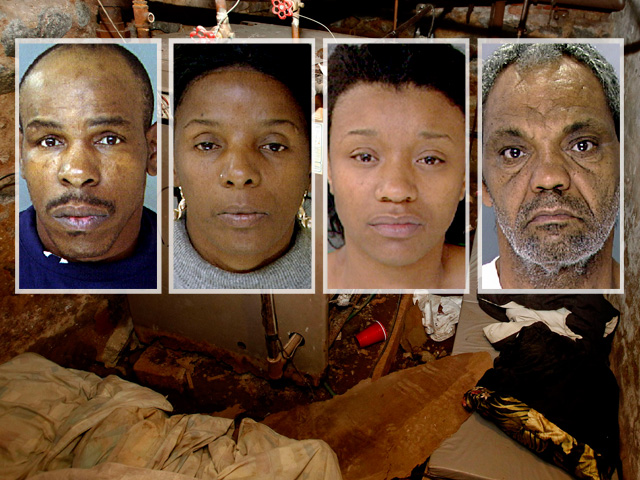 (CBS/AP) PHILADELPHIA - Federal prosecutors said Wednesday that a Philadelphia woman targeted mentally disabled adults and confined them like "zoo animals," forcing some into prostitution and causing the deaths of two victims, in a scheme to steal their Social Security benefits.

Linda Ann Weston, 52, was indicted on charges including hate crimes, kidnapping, murder in aid of racketeering, and forced human labor. Authorities said this is the first time the federal hate crimes statute has been used to protect the disabled.

"Shocking does not begin to describe the criminal allegations in this case, where victims were tied up and confined like zoo animals and treated like property akin to slaves," U.S. Attorney Zane David Memeger said.

The investigation began in October 2011 after a landlord discovered four malnourished victims locked in the basement of a Philadelphia apartment building, including one who was chained to a boiler. Authorities soon began untangling a complicated web of relationships among victims and their alleged captors in an investigation that spanned several states.

Weston has been jailed since then and pleaded not guilty to related state charges. Her lawyer, George Yacoubian, said Wednesday that federal prosecutors had "over-reached for effect" with the new charges and that Weston maintains her innocence.

The 150-page grand jury indictment describes Weston as the ringleader of a "family" that included her daughter and three men who prosecutors say helped control and subjugate the victims.

Weston used "cunning, trickery, force and coercion" to get mentally disabled people to designate her as their caretaker, allowing her to illegally collect about $212,000 in Social Security payments over 10 years, Memeger said.

In all, authorities allege that six disabled adults and four children were held captive in "subhuman" conditions in basements, attics and closets at various times between 2001 and 2011. The victims were often drugged, deprived of food and medical care, and forced to use buckets for bathrooms, officials said.

Authorities said Weston forced two female victims into prostitution to earn more money for the family when they lived in Texas and Florida.

Two other women died while living with Weston, leading to murder charges that make her eligible for the death penalty, which Memeger said prosecutors are weighing whether to pursue.

Authorities said Maxine Lee, a disabled Philadelphia woman, died of meningitis and starvation while living with Weston in Virginia in 2008. Another woman identified in court papers as D.S. died in Philadelphia in 2005 after prosecutors said Weston fed her drug-laced food while keeping her captive in a laundry room. Weston allegedly staged the death to look like an overdose.

Weston already served time for the starvation death of a man she locked in her Philadelphia apartment nearly three decades ago.

McIntosh, Thomas and Wright were already named as co-defendants in the state case against Weston. Jury selection for that trial was scheduled to start Monday, but the Philadelphia district attorney's office said it will withdraw all charges in light of the federal indictment.