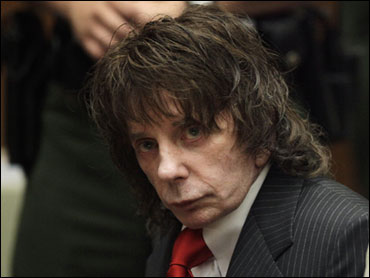 Phil Spector was sentenced Friday to 19 years to life in prison for the murder of actress Lana Clarkson, who was shot through the mouth in the music producer's home six years ago.

Spector, 69, looked straight forward and showed no emotion as Superior Court Judge Larry Paul Fidler ordered a term of 15 years to life for second-degree murder plus four years for personal use of a gun.

Clarkson's mother, Donna, made a brief statement before sentencing, speaking of her daughter's fine qualities, sense of humor, intelligence and dedication to her craft of acting.

"I'm very proud of Lana, proud to be her mother," Donna Clarkson said. She added, "No one should suffer the loss of a child."

The judge also ordered Spector to pay $16,811 in funeral expenses, $9,740 to a state victims' restitution fund and other fees.

Spector, dressed in his customary dark pinstripe suit with a red silk tie, was led away immediately. His attorney asked that he be transferred immediately from county jail to a state prison. It was not immediately known to which prison Spector would be assigned.

Spector gained fame decades ago for what became known as the "Wall of Sound" recording technique that changed rock music.

Clarkson was most famous as the star of Roger Corman's 1985 cult film classic "Barbarian Queen." She was 40 when she died.

Spector's young wife, who is in her late 20s, attended the sentencing.

"This is a sad day for everybody involved," Rachelle Spector said. "The Clarkson family has lost a daughter and a sister. I've lost my husband, my best friend. I feel that a grave injustice has been done and from this day forward I'm going to dedicate myself to proving my husband's innocence."

Spector's son Louis, accompanied by his wife, also came to the sentencing. He had attended much of the trial.

"I'm torn about this," he said. "I'm losing my father who is going to spend his life in jail. At the same time, justice is served."

Deputy District Attorney Alan Jackson said afterward that the outcome sent a message: "If you commit crimes against our citizens we will follow you and prosecute you. And no matter whether you are famous or wealthy, you will stand trial."

Asked how he felt about Spector personally, Jackson said, "I find nothing tragic about him. Everything he did was intentional."

Jackson said the case was "rock solid" legally and will not be subject to a successful appeal.

Defense attorney Doron Weinberg told reporters that the appeal will be extremely strong.

"Mr. Spector did not kill Lana Clarkson," he said, "and we hope by the time we are through we will be able to prove that."

Spector had two trials with essentially the same evidence. His first in 2007 was televised gavel to gavel and spectators flocked to the courtroom. But when the jury deadlocked after a five-month trial, his legal "dream team," which at times numbered half a dozen lawyers, bailed out.

By the time the second trial started in 2008, interest had waned. The judge ordered cameras turned off and only a handful of spectators and reporters stopped in sporadically to watch testimony.

During jury selection, only a few panelists remembered Spector's heyday as producer of teen anthems including "To Know Him is to Love Him" by The Teddy Bears, The Ronette's "Be My Baby," The Crystals' "Da Doo Ron Ron" and The Righteous Brothers' classic, "You've Lost that Lovin' Feelin'." Spector also worked on a Beatles album with John Lennon.

Ironically, Clarkson didn't know Spector's music legacy either when she met him only hours before she died at his Alhambra "castle" in February 2003. She was working as a hostess at the House of Blues nightclub on the Sunset Strip, where she had to be told by a manager that Spector was an important man.

His time had passed. Clarkson's career also was ebbing. Their fateful meeting, recounted in both trials, led to her death and the end of his life as he knew it. For the next six years he spent millions of dollars on lawyers as he sought to prove that Clarkson killed herself.

But what had happened inside his house was never clear. Clarkson's body was found slumped in a chair in a foyer. A gun had been fired in her mouth. Spector's chauffeur, the key witness, said he heard a gunshot, then saw Spector emerge holding a gun and heard him say: "I think I killed somebody."

Weinberg said forensic evidence proved that Clarkson shot herself and cited her desperation at not being able to get acting work. Jackson said the shooting fit the pattern of other confrontations between Spector and women.

Much of the case hinged on the testimony of five women from Spector's past who said he threatened them with guns when they tried to leave his presence. The parallels with the night Clarkson died were chilling even if the stories were very old - 31 years in one instance.

Weinberg said Spector's appeal will assert that the judge erred in allowing the women to testify.