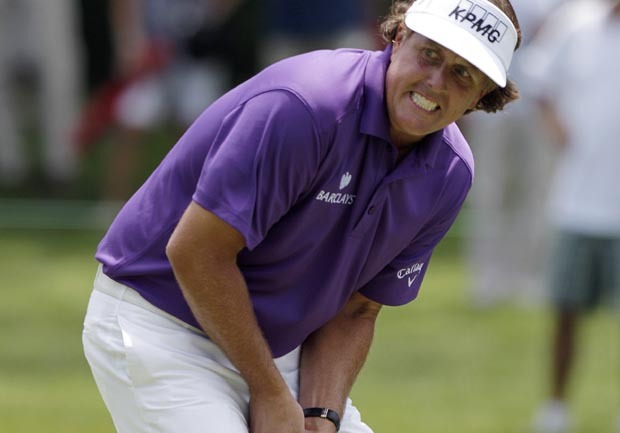 (AP) DUBLIN, Ohio - It was a strange day of rises, falls and departures at the Memorial Tournament.

Phil Mickelson played 18 holes, said he was tired and withdrew, while his playing partners blamed fans with cellphone cameras. Four-time winner Tiger Woods was in his accustomed spot near the top of the leaderboard despite a double-bogey, while Rory McIlroy weathered an embarrassing quadruple-bogey.

And the best rounds of the day at the star-studded tournament — featuring seven of the top 10 players in the world — were put up by Scott Stallings, Erik Compton and Spencer Levin, who have a grand total of one PGA Tour win.

The biggest news was that Mickelson shot a 79 and then told playing partners Rickie Fowler and Bubba Watson that he was going home because he was mentally drained after a hectic past few weeks that included taking his wife, Amy, to Italy and France for her 40th birthday.

"I've got to be more big picture-oriented and think about the U.S. Open (in two weeks at Olympic) and what's best to get my best golf out there, and I need the next few days to rest up a bit," Mickelson said, offering regrets he wasn't living up to his "responsibility" to finish the tournament.

The 79 was his worst round ever at the Memorial. He declined to say whether he was bothered by distractions on the course.

But Watson and Fowler laid the blame for his withdrawal on fans who continually distracted Mickelson by snapping photos with cellphone cameras.

"Phil's a great player and a great champion and it just took him out of his game. It's sad. It's sad that cellphones can make or break a championship," said Watson, who shot a 75.

Watson said the tour rule on cellphone cameras isn't working. Fans are allowed to have them on the course if they are put on vibrate and used only in specific areas.

"It makes it very difficult," he said. "Ever since they made that rule that cell phones are allowed, it's just not fun playing."

"There were a few phones out there," he said with a grin. "There were a few times when we had to back off and reset. You could see Phil was a little fatigued and was having trouble blocking it out a bit."

Stallings shot a 6-under 66 for a one-stroke edge on Compton and Levin. Seven players were at 69, with Woods and Ernie Els among the crowd at 70. World No. 1 Luke Donald, McIlroy and Fowler were in the group at 71. Defending champ Steve Stricker bogeyed his last three holes for a 73.

Stallings, who missed six weeks earlier this year with torn rib cartilage, sounded as surprised as anyone that he sat atop the leaderboard.

"It's been a very — `lackluster' would be an understatement — season," said the Massachusetts native, who won the Greenbrier Classic last July during his rookie season on tour. "I stayed positive all throughout being injured. I kept telling myself that it was only a matter of time before a round like this was coming around."

The 27-year-old needed just 25 putts, chipping in for eagle at the par-5 seventh hole.

Compton is best known for persevering through heart transplants in 1992 and 2008. He has finished in the top 25 of just one of his 44 career events, but has brought untold publicity to heart disease and transplants.

"My wife flew in. Maybe she's good luck," said Compton, whose current heart came from a donor in the Columbus area.

Levin also had an incredible putting day, saying, "I don't think I've ever putted that good."

"Maybe for Tiger or some of the best players of all time like (Memorial founder Jack Nicklaus), they play well all the time," Levin said. "But for at least nine out of 10 guys have ups and downs throughout the year and I guess it's been a little lull (for me)."

Woods has lulls, too. He had one on the ninth hole.

Woods, who has finished tied for 40th twice and missed a cut in his last three disappointing starts, was 2 under and near the lead when he had a double bogey midway through his round. He rebounded with two birdies and no major mistakes the rest of the way in a 70 that left him tied for 11th, four shots back.

McIlroy took a quadruple-bogey on Muirfield Village's signature par-3 12th. It looked like more trouble for the world's No. 2-ranked golfer, who had missed the cut in his last two starts.

He cleared the large lake on the 184-yard hole, but drew a downhill lie in the deep bunker behind the green. His sand shot rolled through the green and into the water. From the drop area he hit into the front bunker, muscled the ball out to 11 feet and two-putted.

But McIlroy, showing the moxie he'll need to defend his U.S. Open title, recovered with five birdies and a bogey the rest of the way to get to 71 and within striking distance.

"I hung in there well and I'm proud of myself for the way I just fought back," he said.

That was his version of picture-perfect.