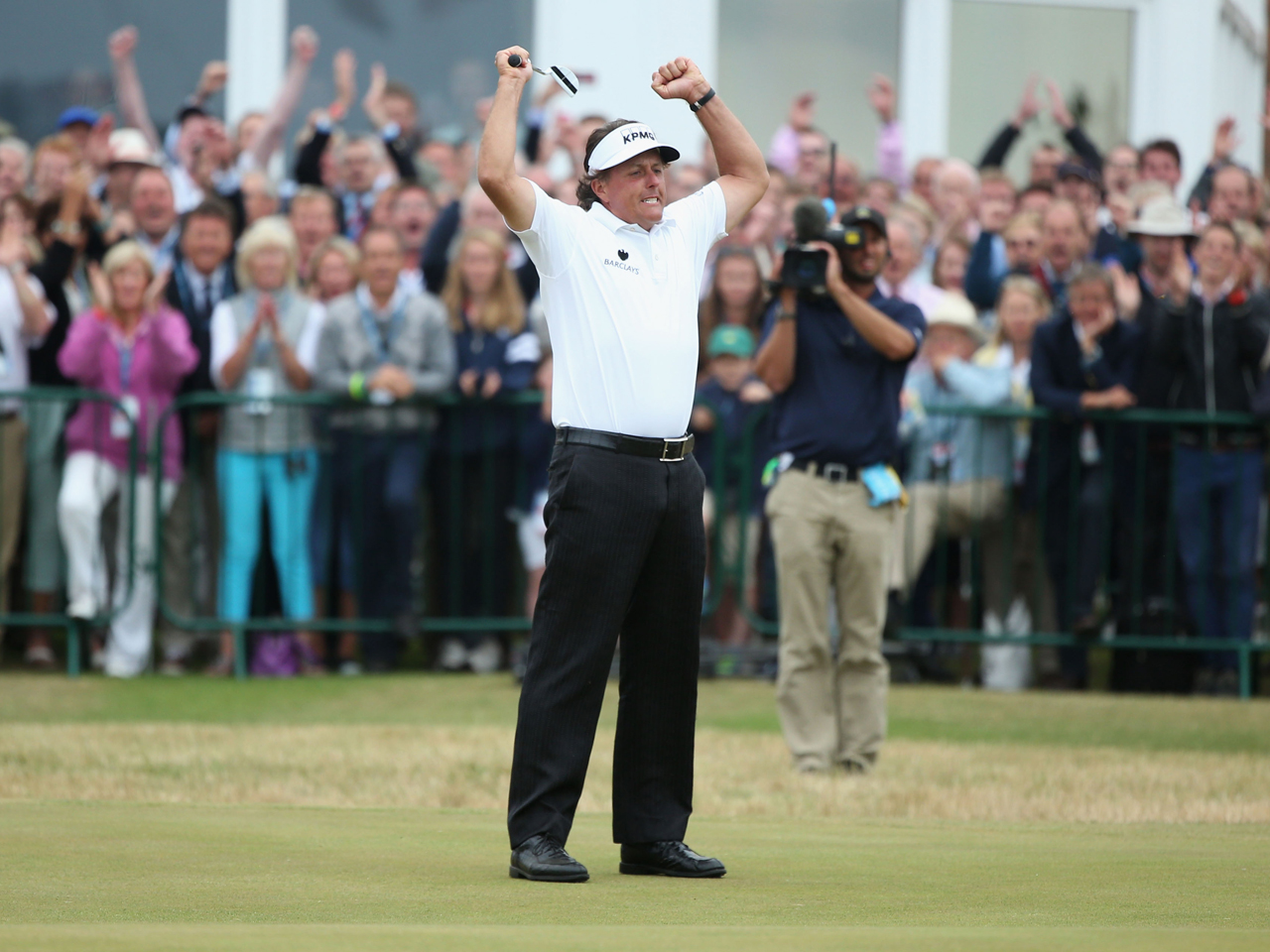 GULLANE, ScotlandInstead of another excruciating loss in a major championship, Phil Mickelson got a chance to celebrate early.

A brilliant closing round at challenging Muirfield made it possible.

Mickelson won the claret jug for the first time and his fifth major championship with a 5-under 66 on Sunday, matching the best round of the tournament on a day when the other contenders — including Tiger Woods — faded away.

Lefty birdied four of the last six holes, winning by three strokes and emphatically erasing the memory of all those close calls that didn't go his way — the latest one just last month when he was runner-up at the U.S. Open for a staggering sixth time.

"This is such an accomplishment for me," Mickelson said. "I never knew if I'd be able to develop the game and the shots to play links golf effectively. To play what is arguably the best round of my career, to putt the way I putted, to shoot the round of my life, it just feels amazing to win the claret jug."

Overall, Mickelson has eight runner-up finishes in the majors, including one at golf's oldest major championship just two years ago.

Now, at age 43, he's finally got his name on the claret jug, three-fourths of the way along to a career Grand Slam and assuring he'll go down as one of the greats of the game.

He began his amazing finish with a 8-footer for birdie at the 13th, getting his score back to even par and giving him a score that he thought would be in the mix at the end if he simply parred out.

Mickelson did much better than that, rolling in a 20-footer at the 14th for another birdie, reaching the green in two at the par-5 17th to set up yet another birdie, and closing it with a 10-footer on the final hole for a 3-under 281 total.

Even though there were still four groups still on the course, Mickelson knew he had done more than enough to win. He pumped his fists and let out a yell. His caddie burst into tears. His wife and kids celebrated just off the green.

Lee Westwood began the day with a two-stroke lead but was again denied his first major title. He struggled to a 75 that left him four shots back, and Mickelson's victory was assured when Westwood didn't come close to making the eagle he needed on the 17th. Woods was two shots out at the start but a 74 left him five shots behind the winner.

Mickelson was the only player to break par over four days at a baked-out course that bedeviled the world's best golfers.

Everyone but Mickelson, that is. Henrik Stenson was the runner-up at 284. Ian Poulter and Adam Scott finished another shot back.